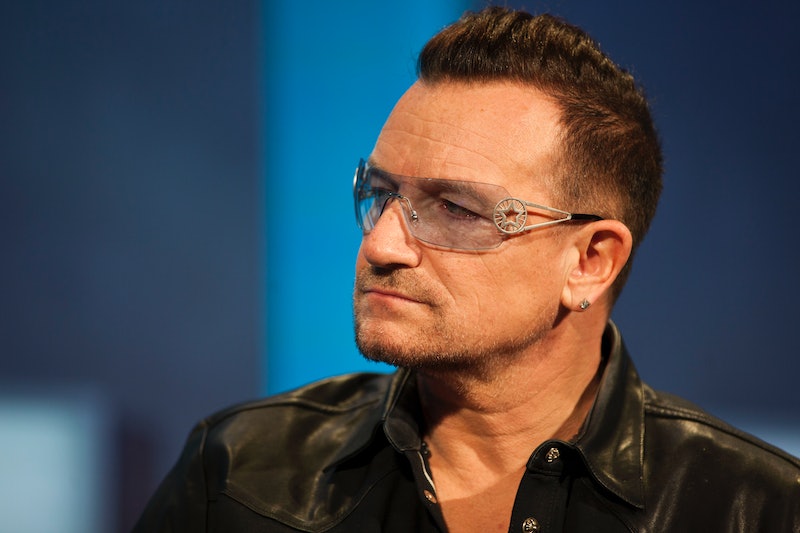 U2's Bono is questioning whether he will ever play guitar again in a heartfelt open letter, posted on the band's website New Year's Day. The post start out with a bit of awareness at the intimidating length of its 6,000+ words stating that, "This is too long. You should not have time to read this. If you do get to the end of it then you are probably on the same painkillers as me." He's not wrong: The letter is long. Set out like the worlds longest acrostic poem (it's an A-Z, with each paragraph corresponding to a letter of the alphabet, some of them even doubling up), it does seem somewhat induced by a painkiller daze. After being hospitalized for months following a cycling accident in Central Park which left Bono "in New York Presbyterian with my humerus bone sticking through my leather jacket", it seems as though the U2 front man has had a lot of time to reflect.

Bono blames the cycling accident on himself, claiming, "I was over indulging in exercise boxing and cycling, which was itself an overcompensation for overindulging on alcohol coming up to [my 50th birthday]." Full of reflection and sort-of resolution, the letter seems like some kind of cleansing exercise for everything that's been going through Bono's mind as he recovers from his injury. It's not until he gets to the letter "I", however, that Bono makes the revelation about his ability to play his instrument, "As I write this, it is not clear that I will ever play guitar again." I'd insert something snarky about the nature of celebrity, music, and its inherent self importance here (because while it's sad that he might not get to play an instrument he's passionate about again, he's still a happy kazillionaire with a rich and dynamic life, whereas there are children being exploded to death in the world every single day), but it appears Bono might have a healthy dose of perspective after all, going on to say, "The band have reminded me that neither they nor Western civilization are depending on this." We're not, but wish Bono a speedy recovery regardless, because all people should have all good things in the new year.

You can read the whole letter here.