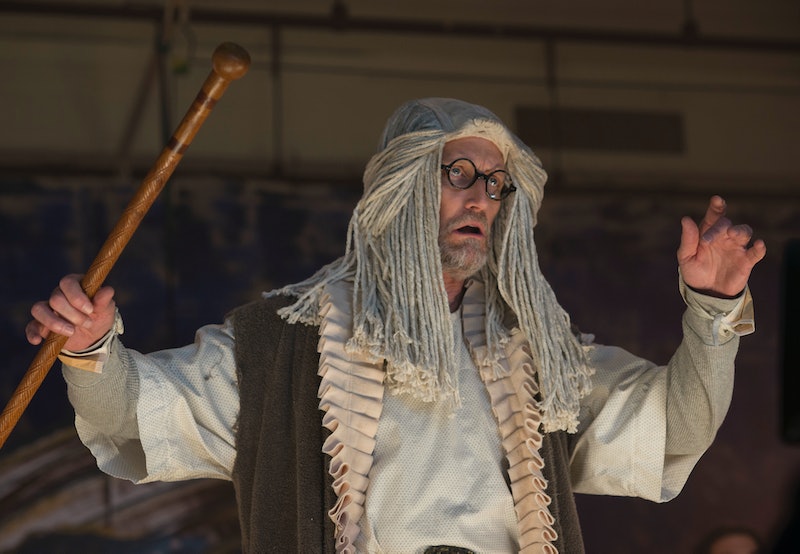 Gotham is returning with an all-new, all-Arkham Asylum episode on Jan. 5, and I'm curious to meet some of the inmates, who have the distinction of being among the very first people to be screwed over by how bad Arkham Asylum is at rehabilitation. Christopher Heyerdahl will be joining the Gotham cast as Jack Gruber, an electrical genius who will pose a huge complication for newly minted Arkham security guard Jim Gordon. So Gordon's new assignment at Arkham Asylum won't come without its problems. Looks like now instead of the deranged killer of the week, we're looking a whole new formula for Gotham villains — deranged asylum patient of the week! Hey, I welcome the change, because even though the stuff on the sidelines was getting pretty great in the last few episodes, the repetition of that formula was a major drawback. Update: The Jan. 19 episode of Gotham revealed Jack Gruber's true identity.

There sure are a lot of misunderstood, unhinged geniuses running around Gotham City. Remember explosive expert Ian Hargrove? Or the financial guru who was obsessed with cage fighting? It sounds like Gruber will be yet another character in their company — and we might even see one or two of the former baddies again if the show is planning to dive into the asylum population.

For those who aren't spoiler averse, FOX has released a synopsis of next week's episode of Gotham , "A Little Bird Told Me," which adds another dimension to Gruber's character. He will be the engineer of an escape attempt, and in the scramble to catch him, Gordon will test his abilities as a detective. And if he's able to prove himself adequate, with the help of Harvey Bullock and new coworkers Dr. Leslie Thompkins and Nurse Dorothy Duncan, he might find himself reinstated as detective fairly quickly. That implies that Gruber's going to be a pretty dangerous guy, and since "Rogues' Gallery" is both the title of the episode and the nickname given to Batman's pantheon of villains (who often find themselves imprisoned at Arkham), let's look to the Batman comics for any clues to Gruber's identity.

There are no Batman foes named Jack Gruber, but there are a few who have electrical powers, and might serve as his inspiration. "Volt" worked for the Penguin, making him high-tech umbrella gadgets, when an accident gave him electrical powers. If Gruber is escaping from Arkham, one of the first places he'd probably go for protection is organized crime — and there he might be the first person to give Gotham's Oswald Cobblepot an umbrella weapon.

There was also a pretty lame vigilante with a groan worthy name: the Electrocutionier (boooooo), who killed criminals by shocking them. The only point of interest? After he was killed, he was succeeded by a few copycats and relatives, which could explain why he's being introduced now, so long before Batman will take to the streets wearing his cape.

Of course, the Gotham writers could just be making up Jack Gruber as another one-off type of villain, so don't get your hopes up too high that we might be seeing Heyerdahl screaming "I am the Electrocutioner!" anytime soon — even though that would be amazing.