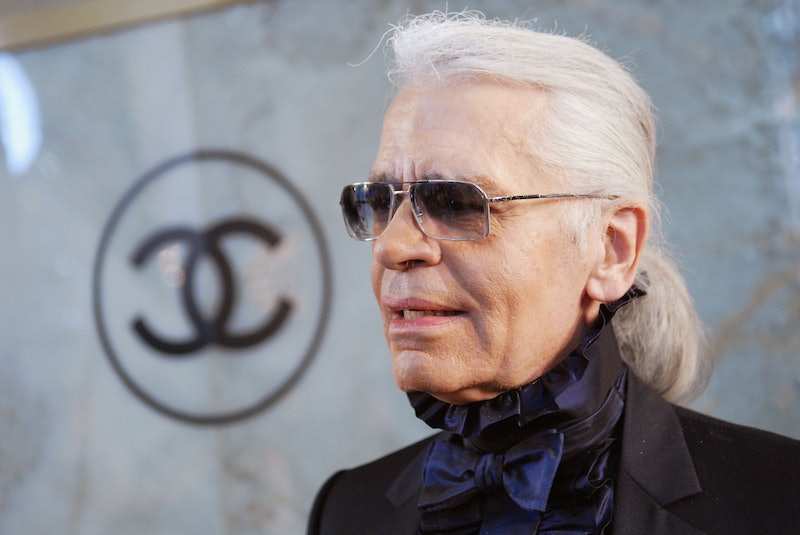 Karl Lagerfeld may be famous for being a living fashion legend, but he’s also made a name for himself with his snarky witicisms about, well, everything.

Behind those black aviator sunglasses and powder white hair abounds wisdom on just about everything. The countdown was on for someone to go and make a book about it.

Enter the brilliant team behind The World According to Karl . Patrick Mauriès spent months scouring interviews, culling Lagerfeld's most quotable-quotes, and squeezing them into a modest 176 pages of pure fashion gold. And although Lagerfeld did not personally contribute to the book, according to Fashionista, he did give it his blessing, which basically confirms that it is a true representation of the icon himself.

Over the course of 15 chapters, Lagerfans will get a glimpse of the couture philosopher’s thoughts on a variety of topics, some of which are brought to life by Charles Amine’s delightful illustrations.

The mostly outrageous, but sometimes humanizing quotes reveal he’s like us in a couple of ways (see: dry shampoo), but for the most part, he’s from an entirely different world, one according to him, and one we’d buy a book about.

Here are our favorite Karl Lagerfeld-isms from The World According to Karl, out now:

On fitness: "I worked out a lot before I was 20. I was hard underneath. I had just a little padding. I was quilted. Always Chanel..."

On fashion: “I am kind of a fashion nymphomaniac who never gets an orgasm. I am never satisfied.”

On grooming: “It’s always been my dream to have white hair. Dry shampoo is my cocaine.”

On body shape: “I want to be a chic coat hanger.”

On your Lululemons: “Jogging pants are a style of defeat. You’ve lost control of your life, so you go out in jogging pants.”

On his profession:"When you hear designers complaining about the challenge of their profession, you have to say: don’t get carried away—it’s only dresses."

On Coco Chanel: "What I've done, Coco Chanel would never have done. She would have hated it."

On his feelings: “I have no human feelings.”

On the color pink: "Think pink. But don't wear it."

On himself as a brand: “I am a living label. My name is Labelfeld not Lagerfeld.”

On his iconic status: "I've always known that I was made to live this way, that I would be this sort of legend."