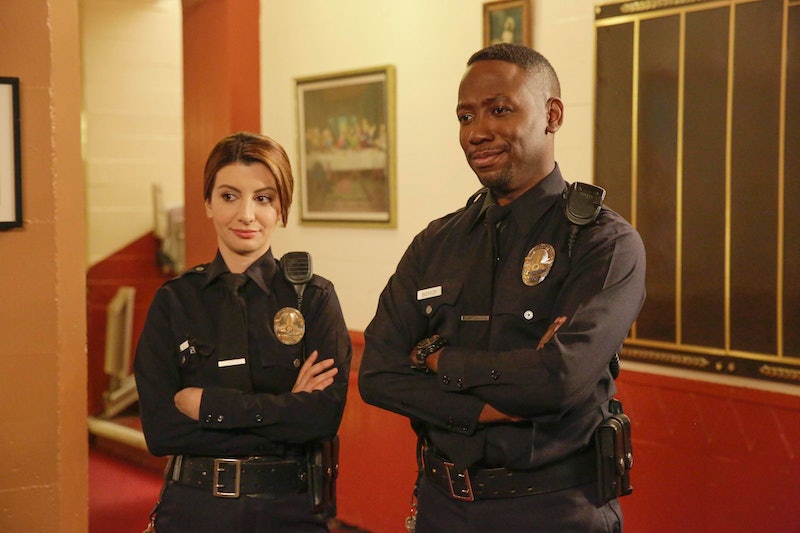 When New Girl returns on January 6, there will be a familiar face popping up among the cast. Nasim Pedrad, Saturday Night Live alum and current Mulaney star, will put in a guest appearance on the show. I don't know about you, but I think Pedrad is great, and I wouldn't mind seeing her do guest appearances all over movies and television. So, is Nasim Pedrad doing anything besides New Girl and Mulaney ?

Unfortunately, nothing has been announced yet. She hasn't given any interviews that hint at any credits other than the shows she's currently working on. Looks like, if you want to see Pedrad acting, you're going to have to turn on FOX.

At least there's New Girl. On the sitcom, she'll be appearing as Aly, Winston's training officer. According to TV Line, "Aly’s diminutive stature will apparently be a cause of consternation for Nick and Coach, who are already freaking out about Winston’s recent graduation from the police academy and impending entry into the field." Psshhh, Winston's roommates are worried because Aly is short? Take it from a short girl — we may not be able to dunk a basketball, but we're plenty tough.

It makes sense that Pedrad would do New Girl as her extra-curricular activity. It's from the same network, so presumably it's pretty convenient to get from one show to another. Distance was one reason Pedrad didn't try to swing holding down both Mulaney and Saturday Night Live. "At the end of the day, these are two shows filming at the same time on opposite coasts," she told TV Guide at the Television Critics Association's fall previews. "It wouldn't have been practical to stay there." TV Guide also reports her as saying of SNL, "Obviously there's nothing like that show and I was lucky to be there for five years...[but at] some point you have to leave."

I get that, unless you're Darrell Hammond, every SNL cast member has to leave at some point. But, in my opinion, it's a shame that Mulaney is the reason Pedrad left SNL. I only watched the first four or so episodes before I quit the show, but, from what I saw, she could be used for something so much better. I'm especially bitter that, in all the episodes I watched, her character's job was unspecified — and not in a fun, Barney Stinson don't-ask-what-she-does kind of way, either. Two of the main characters, John and Motif, are stand-up comedians, but Pedrad's character, Jane — played by the funniest actor of the three of them, with the most on-camera experience — has to be content just being their roommate/friend.

Which isn't to say she wasn't funny on the episodes of Mulaney I saw. I just think she can be used better. It's good to see Pedrad show up on things like New Girl —hopefully she'll get the spotlight she deserves there.