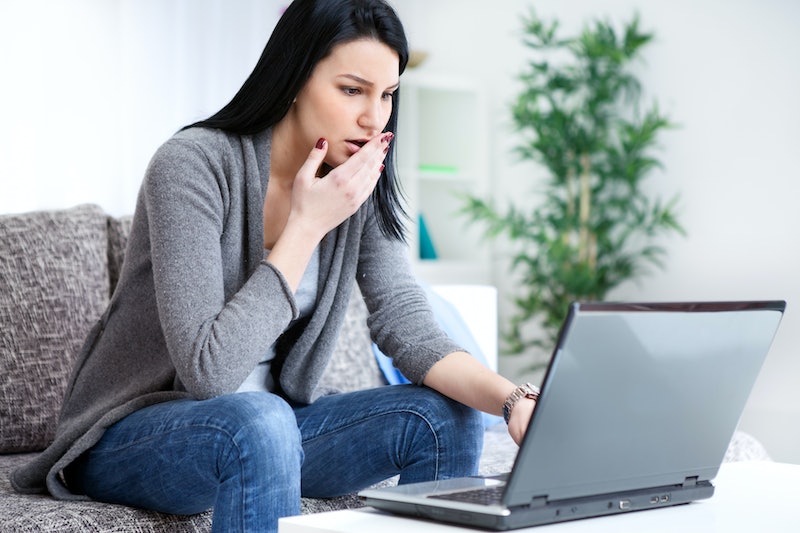 The romantic/personal/sexual section of Craigslist has always been pretty sketchy, but that makes it all the more entertaining — until you actually get roped into the weirdness and taken for a ride. Involving mystery, excitement, deceit, and (of course) heartbreak, this is definitely the worst Craigslist Missed Connection ever. You don't necessarily need to swear off the platform altogether, because it can work. But bring your thinking cap with you wherever you date, because there are some real sleaze bags out there, and the Internet can enable them.

The story starts off innocently enough — Rosemary Counter, writing in the "Modern Love" section of the New York Times — describes how some 10 years ago, she and her friends would read the Craigslist Missed Connections for entertainment, and honestly, who hasn't? Her friend spots an entry that sounds like it's describing Rosemary, because it calls for a redhead wearing a black top who was drinking at a particular hotel on a particular night, and — lo and behold — she meets each and every one of those conditions. Ms. Counter and Mr. Missed Connection strike up a conversation over email, like you do, and she eventually sends a picture to confirm that she's the right person. He's delighted that she is, he sends a picture back, and they're off to the races:

On our first date, he drove all the way downtown to pick me up for an early dinner. It was his pleasure, he explained, as he was dropping his brother off at the airport anyway... We bundled up and walked to the movie theater for a late screening, stopping at a cash machine along the way. “This is my treat,” he said, something he would announce proudly and often in the days to come. When a young man passing by eyed us up and down, he wrapped his arm around my waist and said, “He’s wondering what a girl like you is doing with someone like me.”

Ms. Counter has been "burned so many times" by relationships before that she tries to keep her wits about her, but Mr. Missed Connection is just such a gentleman. They go on dates (out to breakfast, out to fancy restaurants, out to see movies), he showers her with presents, and the whole thing is starting to look and feel pretty much perfect. After 10 blissful days though, Ms. Counter's friend gets a bad feeling about the whole thing: she's suspicious that Mr. Missed Connection hasn't shared more info about himself, that he hasn't invited her to his home, and that, incredibly, he has so much free time and money. Ms. Counter assumes this suspicion on the part of her friend is really just thinly-veiled jealously, but she asks Mr. Missed Connection if there's anything he should tell her, on a whim, and as it turns out, there is.

Normally the strong, silent type, he burst into tears. It was almost as if he had been waiting to confess, this moment a release he had been anticipating. He was married, of course, and under a lot of pressure. He had one child already and another on the way. He didn’t have a brother; it was his wife he dropped at the airport. She and their child had gone to visit family and would be back in a few days. And the clincher? Though he had heard good things about it, he had never been to the Drake Hotel.

He did, however, truly like redheads. “I chose you,” he said. “You were special.”But he hadn’t chosen me. He laid a trap for women with red hair and black tops (and maybe another trap for blondes with freckles), and I was the one who walked into it. Chance hadn’t favored me; it had targeted me, tapping something in me that was dormant but susceptible to romantic delusion. After all, long before he placed his ad I had been loitering on Craigslist, mocking people who I thought were lonely and needy and nothing like me.

Mr. Missed Connection was actually just an opportunistic cheater with a thing for redheads who figured that his odds of catching one through vague, strategically-written personals ads were pretty good. And he was right. Mega ouch.

As Jezebel puts it, in the end Ms. Counter "realizes that fate is probably total bullshit and that maybe we shouldn't laugh at the 'losers' who post online because we might have a little bit of loser in us." While she could have just cried victim and railed against anyone who would ever misrepresent themselves or their intentions, Ms. Counter fully owns up to her agency in and partial responsibility for the situation, young and naive and overly-optimistic as she might have been.