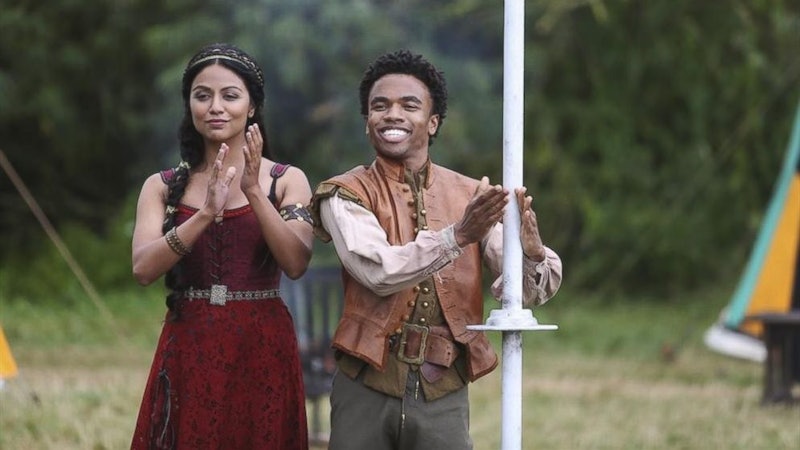 Well you can't argue that it's different. ABC's new four-week comedy extravaganza Galavant premiered on Sunday night and was filled with an epic backdrop, gorgeous cast members and a plot line that, while a bit tired, was resurrected by strange but funny music and lyrics from Disney veteran Alan Menken. The creators of Galavant and ABC are definitely smart for not producing a full 13 or 22-episode series out of this very niche idea: It's a fairy tale-themed musical comedy show about the life and quests of a brave knight named Galavant. And they also made a smart choice by stacking the deck in their favor with some hilarious cast members and guest stars. But while the series does offer some great laughs and refreshing silliness at times, the biggest problem is that the female characters in the series don't receive proper attention to be more than just stereotypes. At least for now.

Only two women are regulars in the cast. There's Queen Magdalena who was originally Galavant's love but chose to marry her kidnapper/Galavant's nemesis, King Richard. And then there's Princess Isabella from a faraway land called Valencia who tricks Galavant into a trap of vengeance from King Richard but later starts to fall for him. While both have a few scenes in the show to steal the spotlight away from the men, they could use a lot more. And more importantly, they could use more of a well-rounded comic touch. Right now they're just playing two types of female characters we've seen so many times.

At the moment, Princess Isabella is definitely the more fun of the two ladies. She's less outwardly mean-spirited and two-timing, and she is definitely the more badass and empowered woman on the show. But even she is falling under the trap of different female stereotypes. She's manipulating Galavant but will also clearly fall in love with him as he saves the day. Isabella goes to Galavant as a woman in need of saving. She tells him that King Richard has threatened her family which is true but manipulates him into believing that the he must go after Richard because his one true love Magdalena still loves him as well, despite the fact that she very clearly chose the King's money and power over Galavant, quite easily I might add.

Magdalena on the other hand, while outwardly rude yet completely owning her queen status, falls into the trap of the greedy, evil woman who not only turned down her true love but is also cheating on her husband with what seems like anyone she can get her hands on. And she manipulates her husband into doing things for her by telling him that Galavant would easily be able to provide her with what she wants, essentially really only being used as a device that further pits the two guys against each other.

The men on the show definitely get the longer end of the stick in terms of funny and interesting moments. Galavant's squire Sid, played by Community's Magnitude (Pop Pop!) aka Luke Youngblood, doesn't get a lot of screen time in the first two episodes of the series and yet makes an extremely memorable impression. The third episode even dedicates most of a storyline to him. King Richard, played by Psych veteran Timothy Omundson, is easily one of the funniest characters with his great balance of over-the-top flamboyant-ness and his sweet and vulnerable moments. And the series guest stars like John Stamos in the second episode really rake in the extra laughs.

But wouldn't it be more fun for the women to get their comedic due? The only real laughs that came because of the women in the first two episodes of Galavant were when Princess Isabella ogled Galavant (rightfully so) and when Magdalena rejected Galavant on her wedding, and even that last one wasn't that great. n a show packed with hilarious male comedians, wouldn't it be extra impressive the women get to steal some scenes, or at least get a nice balance of comedic moments? That's the dream.