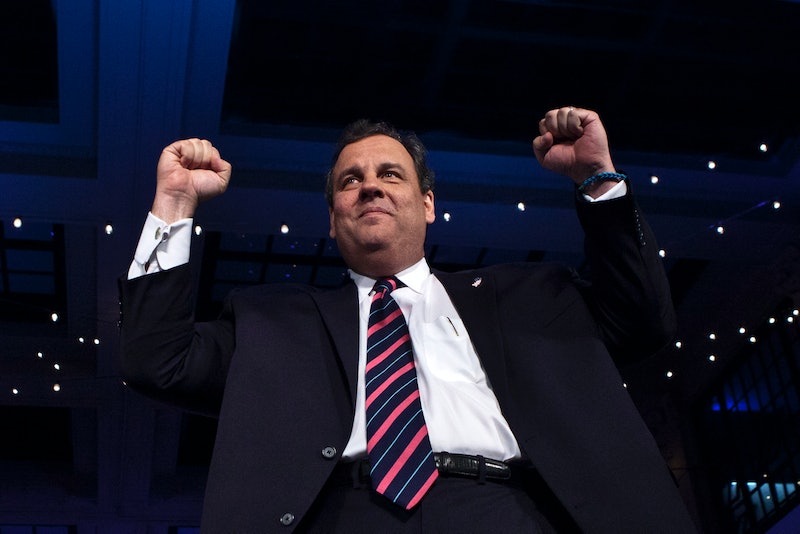 He may have been in an orange sweater at Sunday night's game, but there is no doubt about it — Chris Christie is a huge Dallas Cowboys fan. The New Jersey governor was spotted at the Boys' match-up against Detroit, celebrating a win alongside the Dallas team owner Jerry Jones and his son Stephen. And though his unsuccessful vie for high fives is at least hilarious and at most a heartwarming fulfillment of childhood fandom, his constituency is none too pleased.

It was a special game for a longtime fan. Sunday's marked the first Cowboy playoff appearance in five seasons, so it makes sense that someone who has rooted for Jerry's boys his entire life would celebrate. Although most fans don't get to watch the game in a box with Jerry himself, but I guess governors get some perks.

For years Christie has been defending his flout of his state's two teams and the Philadelphia Eagles, who have a large fan base in Jersey. He told Newark's Star-Ledger in 2010:

And he isn't about to hide his allegiances, either.

I don't nuance much very well. You know what? I always hated Hillary Clinton wearing a Cubs hat or a Yankees hat. I'm a Cowboys fan, I'm a Mets fan, I'm a Rangers fan, I'm a Knicks fan.

He certainly wasn't hiding them here, when Dallas took a 24-20 lead over the Lions. Look at that high five attempt!

I let that loop 20 times while my English muffin burned. So good. And Christie's fashion choice, though I raised my eyebrows last night, is apparently not without reason. When he called into WFAN's "Boomer & Carton" show on Monday to defend his unabashed Cowboys glee, he said the sweater is actually a good luck charm that he has worn to five games this season — all wins for the Cowboys.

Unfortunately, the governor's candid support of his childhood favorite is mostly just getting him trolled.

To be fair, the Cowboys are America's team. So cheering for them is a good thing for a potential presidential contender, right? But far be it from the Internet to give anyone any credit ever. It is a beautiful and strange beast. Also, what does it say that I have seen way more about Chris Christie giving hugs on my timeline than I did about him closing down a bridge as a childish political middle finger?