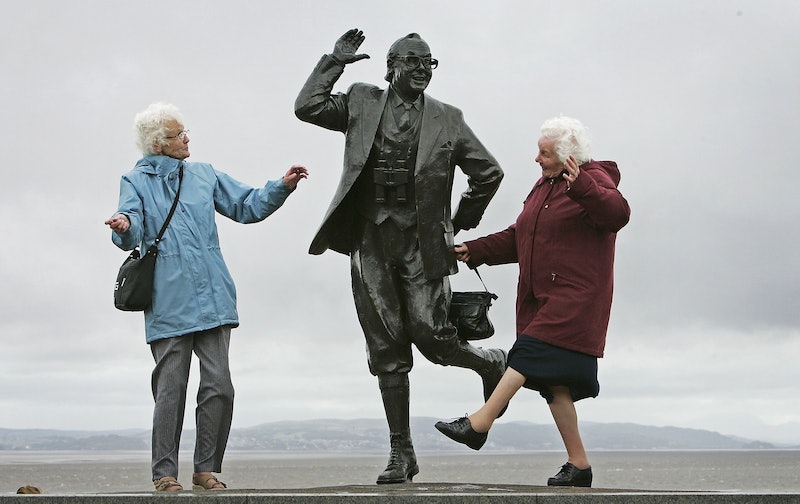 I can never decide if living an entire century would be awesome (so much Netflix) or terrible (what happens when I've watched everything on Netflix?!). Longevity doesn’t run in my family by any means — in fact, quite the opposite is true. I have friends, however, who have had grandparents or great-aunts who lived to be 100 or older, and it always got me thinking about how neat it would be to see an entire century pass by.

We’ve just welcomed in 2015, so people turning 100 this year were born in 1915. That was the year that “bullshit” was added to the dictionary, a movie ticket cost just seven cents, and “Typhoid Mary” caused a legendary outbreak.

But there are six people alive today who saw the dawn of the 20th century 115 years ago. All of them are women. Statistically, women do tend to have a longer life expectancy than men. When I started to read about centenarians, I found that the women on the list seemed happier than ever, even as they entered triple digits. Pretty awesome. And if this list is any indication as to how they made it that far, it might have something to do with how rich and interesting their lives have been.

Here, check out five women who are over 100 year's old — and find out just what their secret is.

If only by a few months, Japan’s Misao Okawa is currently reigning as the oldest person in the world. She's the only person in Japan who was born in the 1800s and is still living. She only began using a wheelchair about five years ago, and regularly did her morning squats, for strength training, well into her early 100s.

Her Secret: When asked how she’s lived 116 years her answer was clear: sushi and sleep. (If that’s really all it takes, I think I’m off to a great start.)

Roberta McCain is perhaps most well known in America these days as being the matron of the McCain family. She married Admiral John McCain SR. after eloping with him to Mexico in 1933. Together, they had three children. As a Navy family, they traveled all over the world during the second World War and the Vietnam War, during which time her son John was captured and held as a POW. She campaigned alongside her son in 2008, becoming known for her somewhat acerbic wit, and continues to travel with her twin sister, Rowena. She celebrated her 102 birthday this year.

Her Secret: While McCain has said in the past that she is just blessed with good genes, one reporter did get her to demur on the subject of achieving centenarian status:

"I don't do anything I'm supposed to do," Roberta tells me on the phone when I ask her how she manages to maintain her almost astonishing vitality. "I don't exercise, and today I've already eaten half a box of caramel popcorn."

Lupita Tovar was born in Mexico in 1910 (though casting agents gave her birth date as 1911 to help her get juicier roles). She came to Hollywood to become an actress in 1929 after being discovered performing in a school play by documentary filmmaker, Robert Flaherty (most famous for Nanook of The North). In addition to dramatics, she also studied voice, guitar, dance and English. Because of her beautiful accent, she was considered somewhat in-demand for film in the new era of talkies. She became most well-known for her performance in the Spanish language version of Dracula, which was filmed simultaneously, and on the same set, as the English-language version in 1930.

Her Secret: Considering that she not only starred in one vampire-themed film herself, but that her grandson also directed Twilight: New Moon, my money is on her actually being a vampire.

Born in Turkey in 1914, Muazzez İlmiye Çığ is probably most well-known for her research into the origin of the hijab. In 2005, a book that she published on her studies of Sumerian culture revealed that the traditional headscarves appeared 5,000 years earlier in Sumerian culture, worn by priestesses who initiated young men in to sexual practices. After her book was published, she and the book’s publisher were under fire for claiming that, essentially, the practice of wearing headscarves originated in Sumerian prostitutes. Both she and the publisher were acquitted, with the trial lasting under a half hour. Her Secret: While she hasn't explicitly revealed her secret, I imagine that being an intellectual badass affords one a few extra decades at least.

Gordon began writing crossword puzzles in the 1950s, and became perhaps the most well-known crossword puzzle constructor in the history of the craft. She began creating them simply because she enjoyed solving them as a child, but soon, it became apparent that she had a serious knack for it. Her first puzzle was accepted by the The New York Times in 1952, and she went on to have a 60 year-long career publishing puzzles in the paper.

In her own words, she describes herself professionally as a “cruciverbalist” ( a person skillful in creating or solving crossword puzzles), and credits her success to "chronic insomnia." She is the oldest living and longest-published crossword puzzle creator of all time, and she still sells crossword puzzles to The New York Times at 100 years old.

Her Secret: While Gordon adorably chalks her prolific career to being bored and unable to sleep, her quote from this interview sums up for me how she's made it this far not just in career, but life: "I started at the top. I wouldn't settle for less!"

More like this
Conversations With Friends' Endometriosis Scenes Are As Brutal As It Gets
By Ivana Rihter
How To Protect Your Digital Privacy If You Need An Abortion Post Roe v. Wade
By Kaitlyn Wylde
'Derry Girls' Creator Teases Exciting Spin-Off Starring These Three Characters
By Olivia-Anne Cleary
Harry Styles Is Set To Rival Tom Hardy With His Own CBeebies Bedtime Story
By El Hunt
Get Even More From Bustle — Sign Up For The Newsletter