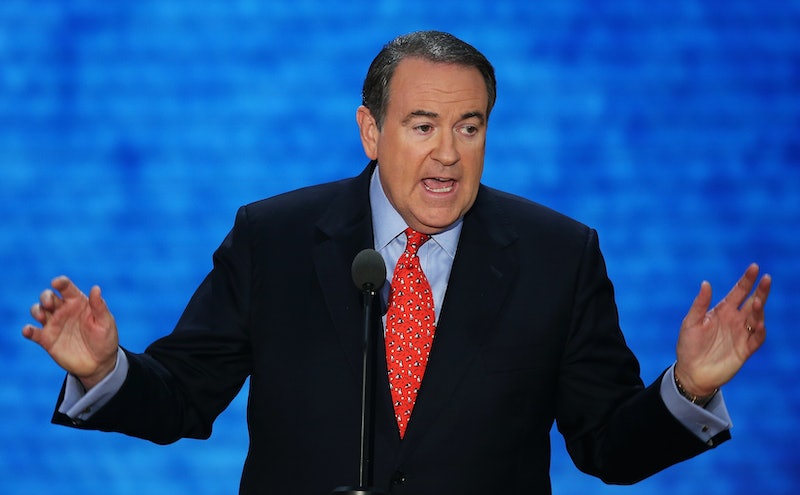 A new year, and new potential candidates weighing their options. With the eyes of everyone in the Democratic Party still waiting and watching for when former Senator and Secretary of State Hillary Clinton finally jumps in the race — assuming she does so, which seems virtually assured — the GOP field is slowly taking shape, with Jeb Bush looking likely to run, and less-heralded figures like Dr. Ben Carson openly flirting with the idea. But now, a major name is considering jumping into the fray: former Arkansas governor Mike Huckabee left Fox News to consider a presidential run Saturday, bringing to an end his six-and-a-half year endeavor for the network, the eponymous show Huckabee.

If Huckabee does indeed decide to run, it'll be his first return to electoral politics since his defeat by Arizona Senator John McCain for the GOP nomination in 2008. In that primary battle, Huckabee turned heads with a better-than-expected performance, though he ultimately finished third behind both McCain and Romney, and he's since been viewed as someone likely to reach for the presidency — at least one more time, with his career in statewide politics ostensibly over. He skipped the 2012 election, however, perhaps ceding to the inherent difficulty of beating an incumbent president, or simply deciding he was happier at Fox News for the time being.

If he runs in 2016, however — and his decision will reportedly come by late spring — he'd immediately become the most potent member of the religious right in the 2016 race, excepting maybe former Pennsylvania senator Rick Santorum if he decided to run. His status as an outspoken, evangelical-appealing Southern Baptist has led him to some controversial positions throughout his career. In 1996, he made headlines for denying a Medicaid payment for a 15-year-old rape victim's abortion, and while out of politics he's been selling a series of deeply flawed "educational" materials for children.

He's also shown a habit of making some troubling statements about women and their reproductive health more generally — in January, he likened the Democratic Party's policies on birth control access to the actions of a sugar daddy, or to use his parlance, "Uncle Sugar." He gave these comments speaking at the Republican National Convention, and it was just as bad as you're thinking.

The fact is the Republicans don’t have a war on women, they have a war for women, to empower them to be something other than victims of their gender. If the Democrats want to insult the women of America by making them believe that they are helpless without Uncle Sugar coming in and providing for them a prescription each month for birth control because they cannot control their libido or their reproductive system without the help of the government, then so be it. Let's take that discussion all across America.

Oh, and he doesn't believe in evolution, too. These considerable social-issue stumbling blocks aside, Huckabee's cache with a Republican primary voters is a little hard to gauge so early on. It'll be interesting to see whether he does decide to jump in, or whether he's happier with his lucrative, lower-risk life as a conservative media personality.