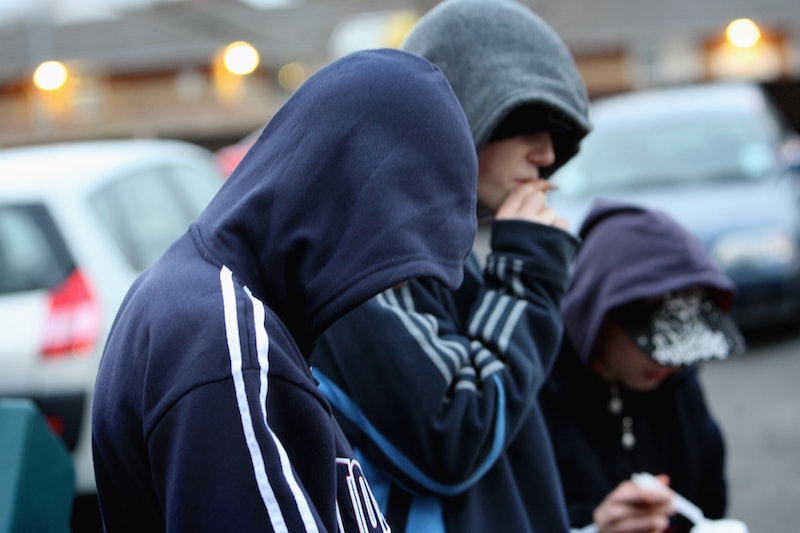 If you had your pick, what new law would you most like to see enacted in your state? If you're a political liberal, there are any number of things you might want to see — gun control, expanded reproductive services, a law that makes stuff like this not okay — but sadly, sometimes what you get instead seems flat-out bizarre. That's precisely what's being felt now by countless residents of the Sooner State, as Oklahoma is considering a new law against hoodies.

Wait, what? Yes, that's right, a law against hoodies. Specifically, the proposed bill would authorize law enforcement to hand out $500 fines to anybody wearing a hood or mask in public, unless they're doing so for a variety of excepted reasons. The bill would bar citizens from hiding "his or her identity in a public place by means of a robe, mask, or other disguise," according to the Huffington Post, but people wearing such items for certain reasons — religious faith, Halloween costuming, sports mascoting, or "minstrel troupes," whatever that means in this day and age — will still be allowed to do so. According to the bill's author, GOP state Rep. Don Barrington, the proposal is all about reducing "crime" and "harassment."

The intent of Senate Bill 13 is to make businesses and public places safer by ensuring that people cannot conceal their identities for the purpose of crime or harassment. ... Similar language has been in Oklahoma statutes for decades and numerous other states have similar laws in place. Oklahoma businesses want state leaders to be responsive to their safety concerns, and this is one way we can provide protection.

For what it's worth, the "similar language in Oklahoma statues" he mentions? He's talking about a 1920s law enacted primarily to keep the Klu Klux Klan from wearing their identity-shielding hoods, a far, far cry from wearing a hooded sweatshirt . If this sounds just a wee bit controversial, well, you're right. In spite of the fact that the hoodie is a garment worn across all strata of American society — would Mark Zuckerberg really get dinged for $500 if he goes hoodie-up in Oklahoma? — it's impossible to escape the underlying racial implications of this proposal.

After all, the foremost attention the hoodie has received in media coverage over the last few years has centered firmly on their use by black men and teens like Trayvon Martin. It's why countless people in high-profile positions donned hoodies in the aftermath of Martin's killing, highlighting the perceptual double-standards between black and white people dressed as such. It was a powerful response to people like Fox News contributor Geraldo Rivera, who one assumes is thrilled by this Oklahoma news — back in 2012, he insisted he believed the hoodie was "as much responsible for Trayvon Martin‘s death as much as George Zimmerman was." In short, an anti-hoodie law on the books would create just one more potential avenue for racial profiling.

Of course, this isn't a new law that's been passed yet — it's just a bill that's been proposed. And if it gets enough negative attention, there's no telling whether it'll move forward. Suffice to say the Oklahoma state legislature could prove sympathetic to this sort of state-enforced fashion code, as it's absolutely dominated by the GOP, and the bill's author is himself a Republican. But that's not to say the proposal isn't stirring controversy — there's nothing inherently conservative about the state legislating your dress code. If the left-wing opponents of this policy are able to find some points of intersection with the right, things could get very interesting.