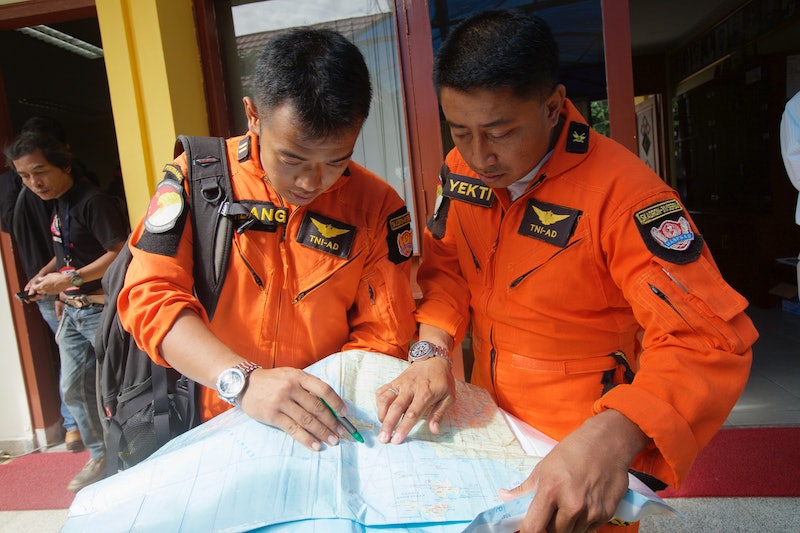 After a week of searching the treacherous waters of the Java Sea, Indonesian officials believe they've located the tail of AirAsia Flight 8501, which crashed last Sunday, killing all 162 passengers and crew on board. According to Reuters, the possible tail was found by a navy patrol vessel. The captain of the ship, Yayan Sofyan, made the hopeful announcement to reporters in Surabaya, Indonesia, on Monday.

Sofyan said there was a "high probability" that the object spotted by the naval vessel is the tail of the ill-fated AirAsia jet, which went down just 40 minutes into its trip from Surabaya to Singapore. Bambang Soelistyo, head of Indonesia's search and rescue agency, added to reporters in Jakarta that he's not " saying it's the tail yet," but it is "suspected." Officials are now awaiting on confirmation.

If the newly discovered object does turn out to be the plane's tail, then this will be a major break in the investigation into what went wrong during last Sunday's flight. The plane's black box, which includes voice and flight data recorders, is located in the tail of the aircraft. With the black box recovered, investigators can start piecing together a clearer narrative of the tragic crash.

However, the black box typically gives off "pings" for weeks after a plane has crashed, and none of these sounds have been detected yet, CBS News reports.

Nearly 40 bodies of the passengers and crew have been recovered from the Java Sea over the last week, leaving more than 100 victims unaccounted for. According to a statement released Monday by AirAsia, only 13 remains have been identified by Indonesian authorities.Severe weather in the region, causing violent waves and heavy storms, has impeded the search and recovery operations. Officials have previously said the majority of the victims may still be located in the jet's fuselage, which has yet to be found. But the search and rescue team may be inching closer to finding the crucial pieces of the wreckage. On Saturday, Soelistyo announced that four "big parts" of the aircraft were discovered in the sea, including what officials presumed to be the fuselage. It's unclear if the tail is one of the four large objects spotted Saturday.

More than 50 ships have been deployed in the search, which is now focused on the eastern part of the Java Sea, AirAsia said in a statement. As searchers try to track down the major pieces of the wreckage, the airline said divers continue to pull smaller debris from the water, such as seats and oxygen masks. Three more remains were found on Monday.

Indonesian National Armed Forces Commander General Moeldoko visited families at a crisis center in Surabaya Monday morning to express his condolences and invite family members to lay flower wreaths at the site of the crash. AirAsia described the general's visit in a statement:

Indonesian National Armed Force Commander urged the families to be patient as the search and evacuation process is still underway supported by the navy, marines and air force. Families were also invited to join a ceremony to sow flowers around the search area, of which date will be announced later. As for this plan, Indonesian National Armed Force Commander will dedicate an aircraft, vessels and accommodation for the families.

Now, the Indonesian government is punishing those at the airline and Surabaya airport who allowed Flight QZ8501 to take off last Sunday. The Associated Press reports the operator of Surabaya's airport and several air traffic control workers have been suspended. All pilots will now be required to have weather reports delivered to them prior to take off. The transportation ministry is reportedly looking into whether other airlines operating in Indonesia have been violating their permits.