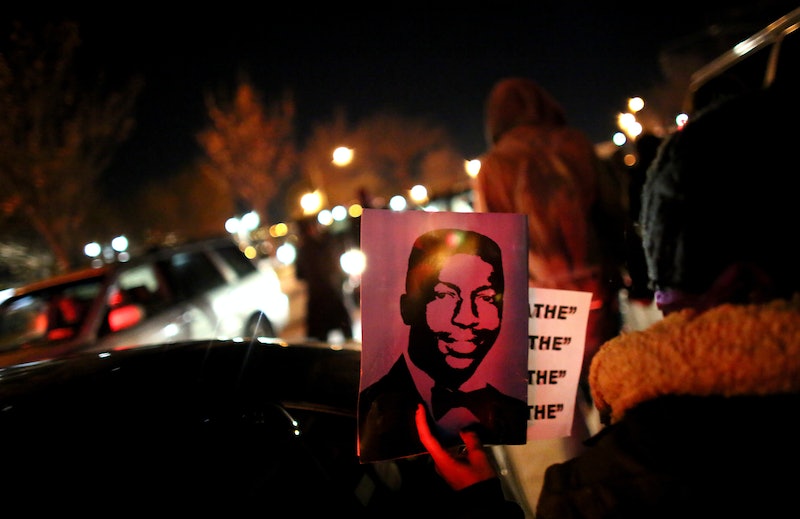 It's been one month since a grand jury on Staten Island decided not to indict NYPD officer Daniel Pantaleo in the death of Eric Garner, but the decision's impact hasn't waned. Immediately after Pantaleo was acquitted, waves of protests swept through the city, and the public demanded to know: how exactly was choking to death an unarmed man who repeatedly cried "I can't breathe" not murder? Well, we might get an answer soon. After multiple groups filed for petitions, a New York judge might release the Eric Garner grand jury hearing documents that explain why Pantaleo walked free. It would be an answer, but it might ultimately raise more questions.

Justice William E. Garnett held a brief hearing at 10 a.m. on Monday on the groups' request to release the transcripts from the Garner proceedings, the instructions provided to the grand jury, and the evidence presented to the grand jury.

Normally grand jury proceedings are kept confidential by law, but many are asking to make an exception for the case of Garner. The New York Civil Liberties Union, the Legal Aid Society, the city's public advocate, Letitia James, and the New York Post have each filed petitions in State Supreme Court in Staten Island to make the case hearing public. They argue that not only should the public have a right to know how the ruling was decided, but that making the documents public would expose any possible flaws in the notoriously nontransparent process.

The NYCLU's executive director, Donna Lieberman, said in a statement:

We are all concerned about the failure of a secret process to provide any vehicle for accountability in the case of Eric Garner. It has raised serious questions about the ongoing viability of the grand jury process as it is currently structured.

Garner's case is the second time the judicial process has been called into question after a grand jury in St. Louis decided not to indict officer Darren Wilson in the shooting of Michael Brown. After that decision was released, the community was outraged and demanded more transparency. The county prosecutor decided to publicly release most of the transcripts from the Ferguson proceedings and evidence presented to the jury. The petitioners in New York are hoping for a similar outcome.

The U.S. is one of the only countries left that still uses grand juries. Essentially, a grand jury is a legal body that conducts official proceedings to investigate criminal cases and to determine criminal indictments. Grand juries are separate from the courts, which do not have any control over its proceedings.

Monday's hearing was preliminary, according to CBS New York, and another will be held on January 29 to hear arguments for releasing the grand jury minutes on the Garner case.