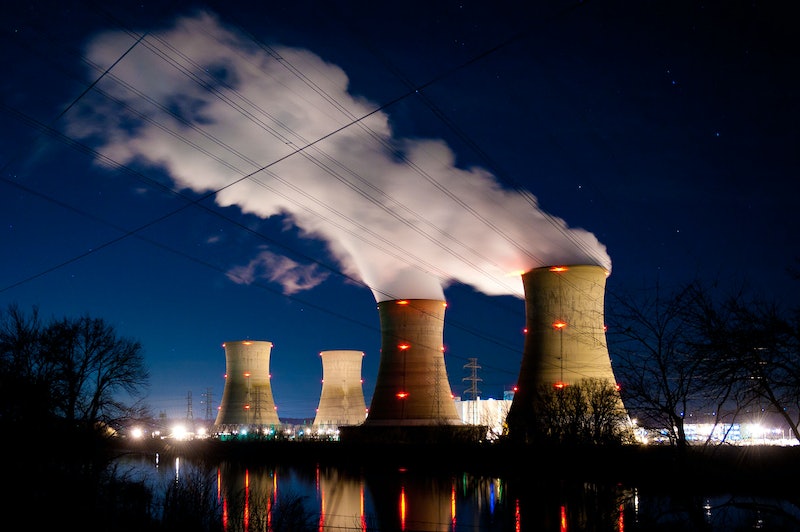 The image of a nuclear plant expelling billowing wafts of steam into the environment is an ominous one for most. It's practically the emblem for global warming. However, it might be time we shift our mentalities on these electricity-generating powerhouses. According to some of the world's top scientists, nuclear power is actually environmentally green when it comes to energy sources and is crucial for mitigating climate change. So if the natural world wants to meet the increasing demand for energy while avoiding even more damage, they're urging the world to reconsider its "historical antagonism towards nuclear energy."

More than 65 conservation biologists have expressed their support for nuclear power in an open letter, which will be published next month in the journal Conservation Biology. Contrary to what most people might expect, these scientists are supporting the building of more nuclear plants as an integral part of a global strategy to protect the environment. The letter argues that in order to seriously curb climate change, the world must replace fossil fuels like coal, oil, and gas with a wider range of electricity sources, which includes nuclear power.

But first, groups like Greenpeace and Friends of the Earth need to stop viewing nuclear power as the enemy and start considering practical uses for it. The letter states:

Much as leading climate scientists have recently advocated the development of safe, next-generation nuclear energy systems to combat climate change, we entreat the conservation and environmental community to weigh up the pros and cons of different energy sources using objective evidence and pragmatic trade-offs, rather than simply relying on idealistic perceptions of what is "green."

Scientists who participated in the letter include Lord May of Oxford, a professor of zoology at Oxford University and former chief scientific adviser to the UK government; Professor Andrew Balmford, a conservation biologist at Cambridge University; and Professor Tim Blackburn, a biosciences expert at University College London.

Among their arguments are that only relying on the more acceptable sources like wind and solar power to replace burning fossil fuels is not realistic in terms of cost, scalability, and land use. Furthermore, using more nuclear power will reduce sources of carbon dioxide, which is the primary greenhouse gas believed to be responsible for climate change. Relying more on nuclear power will actually leave more land to foster biodiversity and protect the Earth's wildlife.

To give a more visual sense of how nuclear power compares to other sources, the scientists pointed out that a golf-ball-sized piece of uranium would supply a typical person for a lifetime compared to 800 elephant-sized bags of coal, 56 tanker trucks of natural gas, and a renewable battery the size of 16 skyscrapers stacked on top of each other.

Our main goal was to show — through careful, objective scientific analysis — that on the basis of cost, safety, emissions reduction, land use and pollution, nuclear power must be considered in the future energy mix.