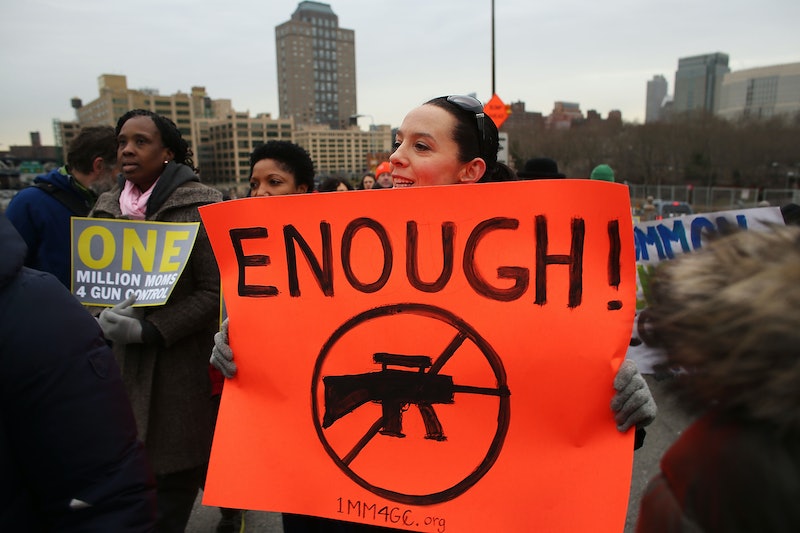 With a new, Republican-controlled Congress, groups fighting for gun control are looking at an uphill battle at the federal level — because, for the majority of our national elected officials, the right to own an assault rifle is more important than safe access to abortion! But taking cues from the gay-marriage movement, groups are taking the fight for safer gun measures to the states, The New York Times reported last week.

With a bit of rebranding and a growing purse, gun groups are turning toward state legislators rather than national representation that has largely gotten them nowhere. Even President Obama has all but abandoned his futile attempts to push through stricter regulations. And with bigger fish to fry (presumably after being shot), Congress is unlikely to entertain legislation that would even scratch the surface on even the simplest of improvements such as better background checks.

Grassroots groups, which are reporting higher volunteerism and donations than ever before, have now started to recast themselves as public health and safety advocates. It's not a necessarily misleading characterization, and certainly a "gun safety" group is more likely to maintain the attention of a gun owner than gun control. It can assure all of the avid hunters and would-be militants that, indeed, no one is trying to strip them of their guns.

There has also been a refocusing of goals. Now, groups are touting legislation that would keep guns out of the hands of people with a history of domestic violence or mental illness. It's harder for gun proponents to argue against those kinds of measures. They aren't sweeping, and they are focusing on bringing about a change while still keeping guns in the hands of responsible users. Not supporting those kinds of initiatives is way harder to justify than all-out bans.

Unlike national campaigns for stricter gun control, this one seems to have more teeth. Although the NRA boasts one of the healthiest lobbying arms both in Washington and in state legislatures, gun groups are already seeing victories that show that, at least in smaller ponds, their initiatives could stand a chance.

This all could result in the same kind of effect we saw with gay marriage laws. No, there is still no federal law to equalize gay marriage, but there was a kind of trickle effect in state legislatures that led to our reality — where most of the U.S. allows same-sex couples to get married. With gun rights, we could see a similar trend. So despite Congress' inability to get past the knee-jerk-Second-Amendment defense, we could see a change for the better.