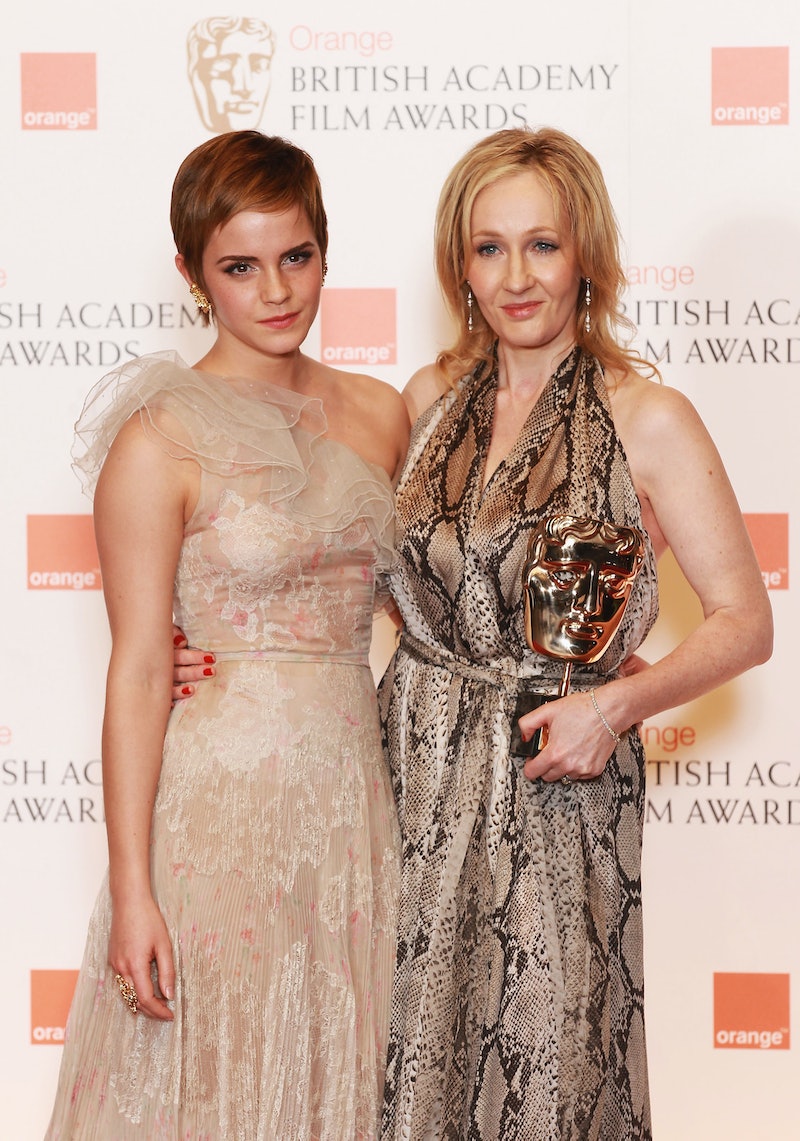 It's a sentiment that was echoed in article after article in the wake of Emma Watson's #HeForShe speech last September for UN Women, and now it's been repeated by J.K. Rowling herself: Hermione would approve. The Harry Potter author expressed the sentiment on Twitter Monday, and it's one that feels all kinds of right. Of course Hermione would approve.

Watson may have moved on from her Harry Potter roots more effectively than ever in 2014 — in other words, the approval of Hermione is probably not chief in her mind as she works to make a name for herself separate from her most famous character — but Hermione's impact as a character is undeniable and ongoing. So it makes sense that her spectre would still loom when Watson publicly called for more attention to be paid to feminism from all genders: Hermione was, after all, a strident activist and feminist throughout the books.

Rowling held a miniature Q&A on her twitter Monday morning; one twitter user asked "do you think that hermione would be proud about emma watson's un speech?," [sic] and Rowling responded that, yes, Watson would very much have her character's approval.

Part of what makes Hermione a character who hold up with time is the fact that she was hardly a perfect young woman: She was fiercely intelligent and fiercely loyal to her friends, but that also forked into to the kind of ferocity that led her to keep a woman trapped in a jar for months on end (Rita Skeeter), as well as lead one directly into a forest populated by creatures who made it very clear they'd scar that person for life (Dolores Umbridge). She taught many of us who read Harry Potter at a young age the importance of social consciousness and activism, but her SPEW was hardly without its glaring problems: Hermione pushed her agenda on even the house elves who were very adamantly asking her not to. Hermione's connection to real-world feminism wasn't just in inspiring hordes of young feminists to follow in her footsteps — her living the pros of feminism was important, but it was just as important to see her living the cons.

Hermione Granger was a flawed feminist, and that is what makes her timeless — because none of us are ever going to be flawless, no matter how much Beyonce we listen to. Watson's #HeForShe was hardly unflawed, either: The things her UN Women speech missed have been pointed out ten times over.

There are no more Harry Potter books, but our time with Emma Watson has just begun. I look forward to watching her grow and learn and be powerfully feminist in a way completely independent of the character who first made her famous — and in a way we'd only ever get with someone very much not fictional.

If J.K. Rowling ever decides to write Hermione again I'll be there with bells on. But if I'm honest, I'm much more intrigued by what the real live Emma Watson has to offer going forward.