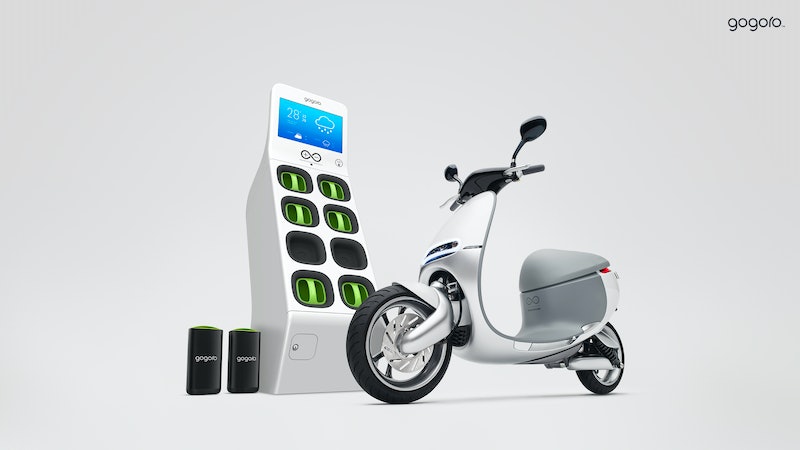 After quietly raising $150 million over four years, a Taiwanese start-up unveiled Gogoro, the world's first Smartscooter. What is a Smartscooter, you ask? Well, I will tell you one thing, it's still a scooter, and therefor still absurd. But Gogoro has designs to make this particular electric device a part of cities everywhere.

At its base it doesn't seem that crazy. It's a fully electric scooter that looks like something from The Jetsons. It's fully outfitted with LED lights, turn signals and functions with customizable sound options, and the ability to get up to 50 mph in 4.2 seconds. It caps out just above Vespa's scooter ability, at 60 mph. But none of this is the really insane part about Gogoro. With that information alone, I'm still inclined to look goofy on a little used Vespa rather than throw down whatever cash Gogoro is going to ask for (the company hasn't announced pricing as of yet).

Here's the insane part: You can't plug it in.

That's right. An electric scooter that you can't plug in. When the Smartscooter's batteries get low, your smart phone (linked to the always-on Bluetooth capability in the scooter) will lead you to a GoStation, where you plunk in your tired battery and in six seconds a fully charged one appears. So in essence, you're sharing batteries with your fellow scooter riders.

You are able to reserve batteries in advance to make sure one will be available when you arrive at the hub. But — and here's the main head scratcher — there aren't any GoStations yet. But Gogoro's CEO, Horace Luke, told The Verge that the company will have 41 megacities by 2030 where the hubs will be bountiful.

It's a great idea, but is it practical? They're basically pulling an Apple in that no existing infrastructure is in place for the Smartscooter. Nothing is compatible for the product. What happens when the battery stop charging? Is there a mechanic that can work on a fully electric motor? The product needs to become indispensable in cities, fast, to get people involved enough to get behind potential maintenance woes.

It's not to say that these risks don't pay off. Apple shook things up when it debuted, and has now made us all slaves to its products. And with big-time investors such as HTC founder Cher Wang, Gogoro has the key players and capital to get it off the ground. Or, in the case of the electric scooter, stay on the ground.