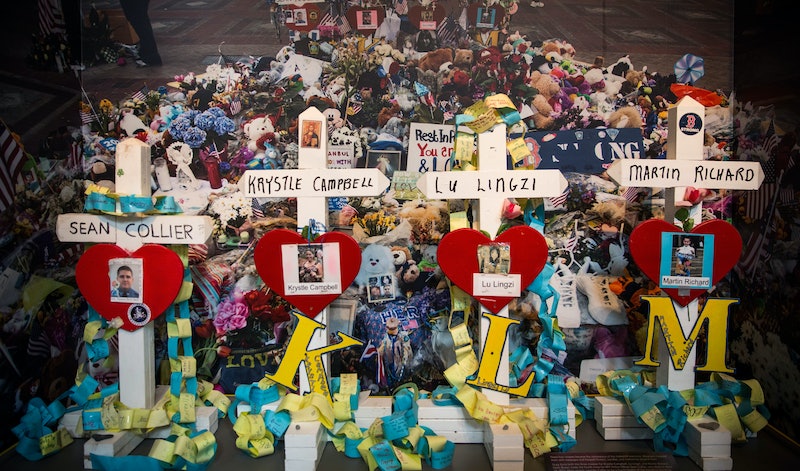 The trial for Dzhokhar Tsarnaev, the leading suspect in the 2013 Boston Marathon bombings, began on Monday at a federal courthouse in the Massachusetts capital. But it'll be a few weeks before the actual prosecution starts — for the next few weeks, over 1,000 prospective jurors for the Boston bombing trial will go through an intense jury selection process. Even for a high-profile case like this one, this jury selection process is set to be more complicated and exhaustive than the norm, legal experts say.

According to USA Today, the potential jurors filing into the Boston federal courthouse on Monday were presented with extensive questionnaires mainly centering around the death penalty. Following the questionnaire segment, about half of the prospective jurors will remain. These applicants will then be questioned individually by the federal judge and attorneys. This is when attorneys and the judge will see who's the most unbiased in the case.

The possibility of Tsarnaev, who is 21 years old, receiving the death penalty is perhaps one of the reasons why picking an impartial and qualified jury may take some time. In federal court, the death penalty needs to be decided on unanimously by the jury. If there's a hung jury, then the convicted would receive life in prison without parole.

However, Tsarnaev's trial will have two phases — a guilt phase and a penalty phase. That means prosecutors would like to see a jury convict him on the most serious counts in the first phase. Meanwhile, the defense is looking to save their client from the death penalty, or get a mistrial.

"The defense will be trying to get jurors who they believe can either sway the entire jury to acquit, or who will be holdouts and not convict," former federal prosecutor and Boston-based attorney Jerry Sternberg told USA Today.

There's a worry, too, that it would be almost impossible to find 12 people in the Boston area who are 100 percent impartial about the case, which continues to affect the close-knit New England city almost two years later. David Hoose, an attorney in Northampton, Massachusetts, told The Christian Science Monitor on Monday that because of the scope of the case, it may be better for the jury selection process to go beyond the end of January:

I would certainly not want to see a jury selected in a hurry in this case. ... This is an adversarial process. A lot of this is psychology, and there’s a real skill to voir diring a jury in terms of asking the right questions.

BuzzFeed News' Mike Hayes reported that U.S. District Judge George O'Toole, who's presiding over the trial, gave the prospective jurors clear directions on Monday on how to handle this high-profile case in the digital media age.

Tsarnaev's lawyers previously tried moving the trial from Boston to a more neutral city, fearing the media, the widespread popularity of the Boston Marathon, and the strong emotions from Boston residents. However, O'Toole and a federal appeals court blocked the request.

Although many Boston residents — and even Attorney General Eric Holder — oppose the death penalty, the Boston Marathon bombings seem to have struck a rawer nerve. CNN reports that even Holder walked back on his death penalty criticisms, authorizing the federal government to see the harsh sentence because Tsarnaev acted in an "especially heinous, cruel and depraved manner."