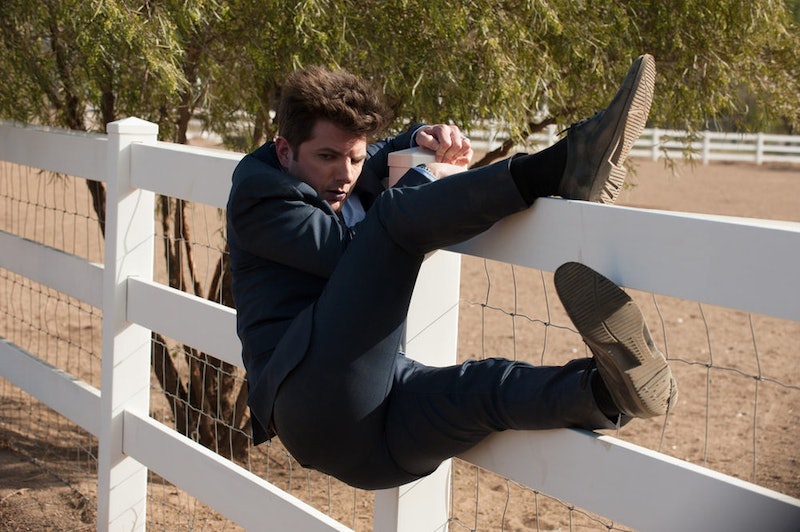 Give me some fuzzy pajamas and ice cream to cry into, because I'm about to go through a serious breakup. Parks and Recreation returns for Season 7, its last, on Jan. 13, and I am devastated. Seriously, finishing the last of this season's 13 episodes will feel like losing my best friend.

Parks and Recreation is a magical show. Although the characters are absurd in their own unique ways, there's a bit of realism to them too. I might not know someone as funny and morbid as April Ludgate, but I've met some tough women who definitely rock that "cute but dangerous" vibe. Tom Haverford's sleazy appeal is excessive, yet I've seen echos of his swag in the frat boys I've met. We can all relate to these characters we have grown to love since 2009.

But there's one character on Parks and Recreation who I relate to more than anyone else: Ben Wyatt. I am exactly like Ben, except 15 years younger and female. Ben is organized but a little bit silly, the semi-sane character who's always ready with a sarcastic comment. If you like inventing your own board games or really want to see the bridge from Inception, you may have more in common with Ben than you think. Here are some signs to watch for that can help you figure out if you're actually Mr. Leslie Knope.

You're So Done with Everyone & Everything

When ridiculous things happen, which is basically all the time, you're ready to react with a judgmental face.

You Don't Understand Why People Do the Things They Do

The best way to deal with crazy people is to back away slowly. Or very quickly, depending on the situation.

You Don't Get Why So Many People Love that 1 Thing

Like Ben with Li'l Sebastian, you're confused by certain pop culture fads that everyone else adores. Maybe you really hated Gone Girl, or you still don't understand what "on fleek" means. You'll listen to friends discussing Ryan Reynolds and Blake Lively's new baby, but you secretly have no idea what's going on.

And You Love that 1 Thing No One Else Does

While other people may think you're crazy for liking something, you'll defend your passion to the end. Even when they're as problematic as Ben's calzones.

The floor is always there for you, especially after a bad night. Sometimes lying on the ground is the only way to deal with life.

Instead of dealing with your feelings like a healthy human being, you tend to stuff those emotions down and focus on totally worthwhile projects instead. Only cool people make clay models.

Let's Be Real, You're Always Right

You always seem to know what's the best thing to do. (And even when you don't, you can pretend.)

You're a Pretty Responsible Adult...

Even if you don't love accounting like Ben does, you still have the work outfits and professional attitude down.

...But You Can Be Immature as Well

Sometimes the best way to react to a situation is by making a stupid face. Same, Ben. Same.

You're Not Afraid To Show Your Nerdy Side

Who doesn't love a man who's honest about his fan fiction reading and writing habits? Especially if you can relate to his love of good fic.

Like, Really Not Afraid To Show Your Nerdy Side

You are always ready and willing to share your extensive fantasy and sci-fi knowledge. If someone asks you about Game of Thrones, or actually gets you an Iron Throne, you're prepared to let your nerd flag fly.

But You Know You're Still Cool

There's nothing cooler than being yourself, quirks and all. You have the confidence to show who you really are and be unafraid of what people think.

And Despite Any Struggles You May Face...

Whether you've gone through a bad breakup, lost your job, or gotten sick from eating your favorite food...

You're Surrounded by People Who Love & Appreciate You

Maybe you've found your true love, or maybe you have some really great friends. People are always there to celebrate your good times, and stick with you through the bad. Even if you're still figuring out where you belong, you know there will be a happy ending. Like Ben Wyatt, you're definitely not alone.