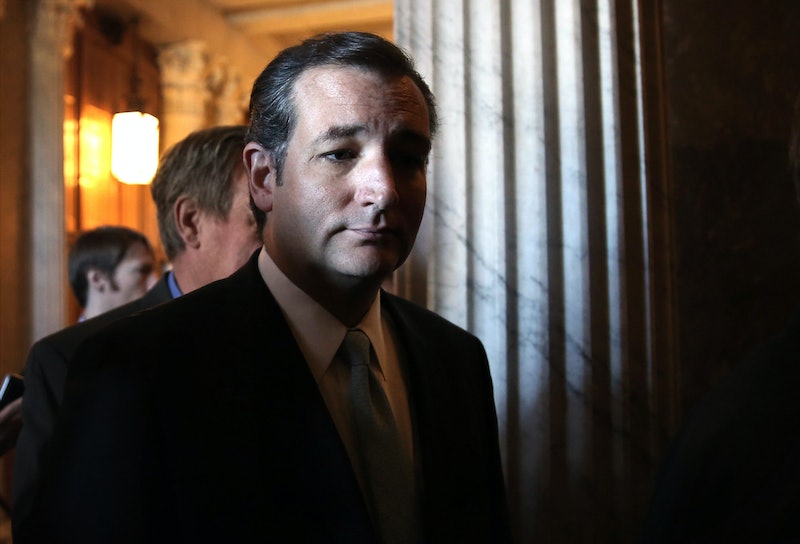 In case you missed it, Texas Senator Ted Cruz is still talking.

On Tuesday the Republican Senator vowed to speak out against Obamacare until he was "no longer able to stand." During his time on the floor Cruz said, "This grand experiment is simply not working...It is time to make D.C. listen." So far he's been at it for over 21 hours.

The Senator has taken no bathroom breaks, eaten only small bites of food and continues to walk back and forth to stretch his legs, but so far, shows no signs of giving up prior to noon when Senate reconvenes.

The not-quite-filibuster started at 2:41 p.m. on Tuesday and involved Cruz pulling an all-nighter, talking to virtually no one.

He took a few breaks from bashing Obamacare to answer questions from other Senators who entered the chamber, including Sen. Mike Lee of Utah, Sen. Rand Paul of Kentucky, and Sen. Marco Rubio of Florida. He also said that he wanted to take the opportunity to read his daughter's a bedtime story and proceeded to read Dr. Seuss' Green Eggs and Ham. (So we guess the rules are a little more lax in DC than they were for Wendy Davis in the Texas Senate?)

Cruz supports a bill in the House that would fund the government but defund Obamacare. The government faces a shutdown in less than one week if an agreement isn't reached.Cruz's antics aren't technically a filibuster, because he doesn't have the power to stop the ensuing vote. The scheduled 1 p.m. test vote on the Federal Spending and Healthcare law will take place regardless of the Senator's actions. The Democrat-led Senate is likely to strip the House bill of its provision that would defund Obamacare and then send the bill back to the House for approval.

While Wednesday's vote won't be stopped, stalling tactics by some House Republicans who want to avoid the implementation of the Healthcare Act could push a final vote on federal spending to the last minute, making the possibility of yet another government shutdown even more likely.

Republican leaders are divided on the move with Senate Minority Leader Mitch McConnell saying, "I think we'd all be hard-pressed to explain why we were opposed to a bill that we're in favor of. "Invoking cloture on a bill that defunds Obamacare, it doesn't raise taxes, and respects the Budget Control Act strikes me as a no-brainer."