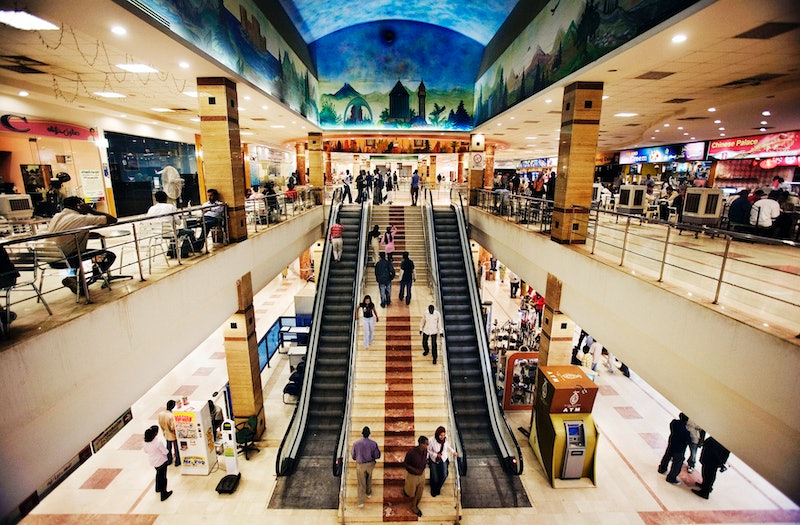 There's more bad news for the American mall. At the end of 2014, mall chains Deb and Delia's went bankrupt, with Wet Seal in danger of the same, and you could hear the sound of many '80s-and '90s-reared hearts shattering into millions of pieces. The American mall could be going extinct, since youth apparel retailers American Eagle Outfitters and Aeropostale are struggling and closing some of their mall stores, which raises concerns. Is it time to put the shopping destination as a whole on the endangered species list? Only time will tell.

Before diving into the meat of the facts, I must note that, like you, malls remind me of my youth, of going out with my friends and spending money that I earned at my after-school job, and being able to pick out clothes to showcase my style, since I was relegated to a Catholic school girl uniform, with shoes and bags being the only form of fashion expression. It's certainly a nostalgic endeavor when I got to the mall.

Yes, I still hit the mall for basics and candles from Bath and Body Works, and I love destination centers with lots of department store anchors and with boutiques that span for miles, making shopping a fitness pursuit at the same time. So the fact that so many malls are not at maximum occupancy bums me out.

The BOF's report about the threatened future of malls highlights the fact that teen clothing chains are the biggest victims of downsizing — and it's (unsurprisingly) due to the digital age. Millennials are finding fashion inspo online and in turn, they spend less on clothes and more on electronic devices. The report suggests that instead of a new pair of jeans, discretionary income is used to pay a monthly iPhone bill.

Additionally, online shopping can be cheaper and faster, and requires no spend on gas to drive to the mall. Personally, I also like to try my clothes on to see how they fit and I prefer the tactile and sensory experience of touching and even smelling pieces I shop for. But I also love the convenience of the point-and-click, the free shipping options, and the anticipation of web purchases. There are those days I just don't feel like dealing with the mall.

The scary facts are thus: Aeropostale is closing 240 outposts and 125 P.S. stores. AEO and Abercrombie & Fitch are also said to be looking to shutter some of their less successful locations. Other clothing chains posting losses include Cache and Bebe, which cater to an older demo.

RadioShack and Sears, which sell electronics and, well, everything else, respectively, are also having problems, with the former looking to shutter shops and the latter closing 235 stores last year.

While the chain retailers like the big "As" — A&F, Aeropostale, and AEO — can address their personal concerns and close stores that don't perform well or they can offer added benefits for shoppers who buy online, that doesn't solve the aforementioned and overall mall issue. With less stores, less people may show up to shop at the remaining stores and then their habits can change. The impact of vendors no longer occupying retail space travels upward, as landlords have stores and storefronts to fill and must address that.

The overall bottom line is effected and it carries over to those stores that are selling well.

This ripple effect could cripple the mall as a destination for more than just clothes and it's not just about individual stores that are struggling. But I'm not quite ready to sound the death knell for the American mall as we know it. I'm not even ready to consider it a candidate for life support.

But there is cause for concern.

It's up to retailers and marketers to come up with creative incentives to combat the shrinkage... since there's nothing quite like drinking an Orange Julius or enjoying a whiff of Cinnabon icing as you cruise through the mall.

More like this
Prefer Alcohol-Free Perfumes? Water-Based Fragrances Are On The Rise
By Audrey Noble
15 Chrome Nail Polish Colors For An Easy, Mirror-Like Manicure
By Audrey Noble
The Beauty Industry Disrupter From Dallas
By Jordi Lippe-McGraw
10 Corsets That *Actually* Work For Big Boobs
By Bella Gerard
Get Even More From Bustle — Sign Up For The Newsletter