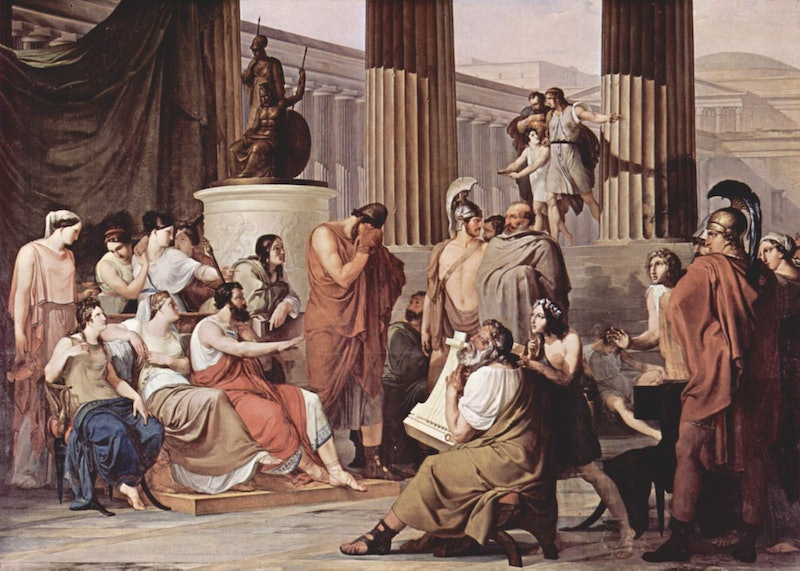 The Iliad and The Odyssey are pillars of our literary and storytelling heritage ― and of our high school English classes. But historian and author of Why Homer Matters Adam Nicholson is questioning everything we know about Homer, the alleged author of these epic poems. Maybe we should have all taken our junior year English teacher with a grain of salt.

Homer, as far as we were told, was a Greek poet, one of the absolute first of his kind to produce literature in Europe, and thus, is the cornerstone of Western canon. Historians credit his work to approximately 800 B.C., and as the stories go, the prolific poet was blind. And of course we probably all had to read The Iliad and The Odyssey for class, and either loved them or hated them. (Though The Iliad is really much more of a read-the-book than see-the-ridiculous-ab-fueled movie kind of text.) Other than that, there's not a whole lot we know about Homer. But Nicholson, after conducting loads of research, begs to differ on those "facts."

I think it's a mistake to think of Homer as a person. Homer is an "it." A tradition. An entire culture coming up with ever more refined and ever more understanding ways of telling stories that are important to it. Homer is essentially shared. ...

One of the exciting things that emerge from that is that in the early days it seems there was no such thing as a single Iliad, no one fixed text, but this wild and variable tradition of the stories, with many different versions in different parts of the Mediterranean, endlessly interacting with itself, like a braided stream in the mountains. That's a very exciting idea for me—that texts are not fixed, unitary objects but like the mental bloodstream of a whole people.

Say what? Homer is the Wikipedia of Ancient Greece?

This isn't the first time historians have questioned the legitimacy of Homer as we have all studied him. In the last decade of the 19th Century, The Iliad and The Odyssey translator Samuel Butler put forth the theory that Homer, in fact, was not a man but a woman. (Huzzah!) And while I love to stand by that theory, Nicholson makes an interesting sociological point about why we need to attribute one, definitive author for these quintessential works of epic poetry.

Today we have an author obsession—we want to know biography all the time. But Homer has no biography. The Iliad and The Odyssey are like Viking longships. Nobody knows who made them, no name is attached to them, there's no written design or drawings. They're simply the evolved beauty of long and careful tradition.

He backs up his claim with the undisputed idea that The Odyssey and The Iliad began as oral poetry.

Homer's works were orally transmitted and orally performed poems, ever changing in the mouths of the different people who learned them and told them again. The Iliad survived for hundreds, if not thousands, of years as a spoken poem and was eventually written down, around 700 to 750 B.C. But no manuscripts survive from that time.

The earliest that survive were found rolled up under the heads of mummified Greek Egyptians in the Egyptian deserts from about 150 to 200 B.C. But they're just fragments, not the whole Iliad.

I love when nerdy literature culture goes full Indiana Jones on us! Nicholson goes on to further question the timeline of the poetry, saying that the works originated much earlier than people believe, closer to 2000 B.C. than 800 B.C. File this along with everything about Christopher Columbus you were taught in grade school with interesting things you wish you knew when you were learning.