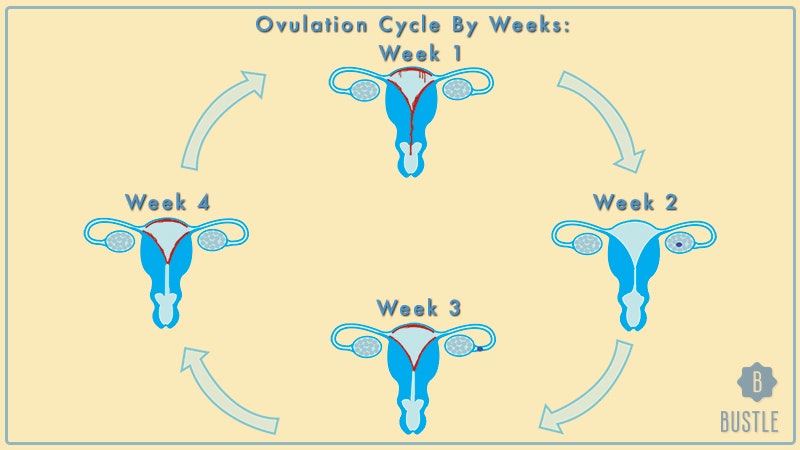 We at Bustle love giving you tips for how to tap into your sexual potential and troubleshoot when things aren’t going your way in the bedroom. But what about finding solutions to those stressful sexual health situations that inevitably crop up when you’re getting down? Emma Kaywin, a Brooklyn-based sexual health writer and activist, is here to calm your nerves and answer your questions. This week’s topic: What’s really going on each week of your menstrual cycle.

Q: I've been on hormonal birth control since I was a teenager. I recently went off and have been getting a natural cycle for the first time. I know every body is different, but I feel like I don't really know what to expect week to week — I feel PMS and a week where I seem hornier (that I'm guessing is ovulation?), but I'd love to more know about what to expect each week of my menstrual cycle.

A: Ah, the many phases of life with a uterus. Everyone’s cycle is a bit different, and cycles can feel very different for an individual over a lifetime (or let’s face it, year). However, there are some things that you can expect at different parts of the month-ish it takes for your body to grow and shed your uterine lining.

First, let’s make sure we’re all clear on what is actually going on during your menstrual cycle. Approximately every month, your uterus grows a brand spanking new thick lining, called the endometrium, for the purpose of feeding and snuggling a fertilized egg released during ovulation and nurturing it into a real live baby. When the fertilized egg doesn’t show, your uterus sheds its lining, which is what we know as menstruation. This happens until menopause, which occurs on average at about age 50.

You’ll notice that a lot goes on during the 28-ish days it takes to complete one revolution around your own personal ovarian moon. There are all sorts of changes happening in your body, making each segment of this month very different. It’s common practice to start counting your cycle on the first day you start your period, so let’s start there and learn what the science says being a menstruating human is like, week by week.

Your period can actually last anywhere from three to seven days. During this time, your uterus is shedding its lining because you have not gotten pregnant. So, how does it affect you, besides the obvious?

Sex during menstruation is a very personal decision — some people feel icky and not sexy, while for others this is their favorite time to get down and dirty. Because your pelvic area is literally more full at this time in your cycle, you are more engorged, which is what happens during arousal. So your period basically gives you a head start on getting frisky.

The good news is that it’s not dangerous to bone when you’re bleeding, although remember that period fluid is NOT a method of contraception, so continue to use whatever form of birth control and sexually transmitted disease barrier you usually use. Even better, sex can help relieve menstrual cramps, and orgasms release endorphins that can combat any bad moods you may be feeling (more on that below).

When you’re on your period, your body can feel... not great. Many people get cramps, which can range from annoying periodic reminders that you are indeed carting around a uterus at all times to mind-melting pain. Some experience nausea as well during this time. Others report changes in body shape, often in the form of bloating or tenderness in their breasts, and some just get really tired. Also, low levels of estrogen can result in headaches.

Some people start off their cycle with some residual mood swings that come from premenstrual syndrome (more on that below in week four), which can last one to two days into your period. Others can feel very tired or sluggish at the beginning of their periods, like your energy is being sapped by the process of shedding your lining and all you want to do is snuggle on the sofa. However, most people start regaining their pep halfway through their period, feeling more energized and happy and ready to hang out with other humans again. Finally, there’s some preliminary evidence that you are at your most empathetic and able to connect with others around days five or six of your cycle, due to lower levels of the hormone progesterone.

Your body actually starts getting geared up to ovulate on day one of your period, but let’s talk about it now. During week two of your cycle, your estrogen and testosterone are on the rise. The follicular phase goes from day one to day 13 of your cycle, because it takes that long to mature one of the thousands of young eggs hanging out in your ovaries waiting for their big day. The maturation process also triggers the re-growth of your endometrium, getting your body ready for either feeding an embryo, or your next period.

As your body hurdles toward ovulation, your libido increases (because, baby-making). You will probably feel more turned on in this week. Remember that much of your sexual desire is very dictated by testosterone levels, and during this week your body is testosterone-heavy. This is super fun but remember that as you get more down to party during this week, you’re also getting more fertile by the day! So use contraception unless you’re trying to conceive.

Coming off the sluggish and perhaps painful first week, you’re likely more energized and less sensitive to pain at this time. Your cervical mucus is also changing during this week, getting clear, thinner, and more slippery, making it easier for sperm to find their way all up in there and survive for longer once they arrive.

Once your period is over, you’re likely to feel fantastic. And that’s not just because you’re done worrying if you’re going to mess up your new undies. Leading up to ovulation, your estrogen and testosterone are both peaking, making you feel more perky, confident, and excited to take on the world. However, high estrogen can trigger anxiety attacks, so remember to breathe and practice self-care.

Ovulation actually refers to a single moment, not a full week, and occurs halfway through your cycle — so day 14 in a 28-day cycle. At this point, your matured egg gets released from one of your ovaries and into the associated fallopian tube, where it hangs out for 24 hours waiting, wishing, and hoping to be inseminated. If no sperm are present, your egg will disintegrate in one day. Poof! Gone. Also during ovulation, your estrogen and testosterone take a dive, then three days later start increasing again, while progesterone levels increase all week.

However, your window of fertility is a bit longer than 24 hours. Why? Because sperm can live for two to three days inside your body. So really, pregnancy can happen if you have sex anywhere from a couple days before you ovulate until 24 hours after.

Significant research has found that your libido goes wild around the time of ovulation. This is due to a spike in the hormone testosterone. Not only do you feel sexier, a bunch of studies show that your behavior can change during ovulation. For instance, research has found that women buy sexier clothing when they’re ovulating. One study eve showed that your voice actually gets a bit higher during ovulation — you can decide whether or not you think that increases your sex appeal. Be aware, however, that by the end of this week, your progesterone levels will cause your libido to dip again. Just another bump on the never-ending rollercoaster of having a uterus.

Most people don’t know when they’re ovulating from any physical indicators, since they’re pretty minute. However, you can tell by a small spike in your temperature — 0.4 to 1.0 degrees higher, to be specific. Your cervical mucus also changes consistency during ovulation, to make it easier for sperm to reach their destination. During your fertile phase, your cervical mucus will be clear, slippery, and have a stretchy quality — like egg whites. After ovulation, your discharge will get thick and cloudy, because of rising levels of progesterone. Also after you ovulate, you can experience food cravings, and rising progesterone can make your body feel sluggish or sedated.

Some people also experience what is called mittelschmerz — from the German, literally "middle pain." This is characterized as either a dull cramping or sharp stabbing pain in one side of your abdomen when your ovaries are releasing their eggs for the month.

A few days after you ovulate, you can feel a bit mentally sluggish or even irritable, which occurs because your levels of progesterone are rising as your testosterone and estrogen levels drop. This is sometimes called pre-PMS because some folks get sort of mini PMS symptoms that last for only a couple of days. Progesterone can also make you feel very calm and snuggly, like you want to just stay at home and need lots of rest.

Additionally, one study found that in the days after ovulation, you can actually be more vulnerable to traumatic memories, experiencing up to three times as many intrusive memories during this week. So take care of yourself!

Assuming you don’t get pregnant during ovulation, you make it to the luteal phase, which starts the day after ovulation and goes until your next period. After ovulation, your body starts releasing lots of progesterone, as seen in week three, as well as estrogen. This causes your uterine lining to get even thicker and comfier for the theoretical embryo you could be cooking in there — for a bit. If there is no fertilized egg implanted in your uterus, your estrogen, testosterone, and progesterone decrease, which causes your endometrium to break down leading to… you guessed it, your period.

When most people think about the menstrual cycle, the term “premenstrual syndrome” or PMS invariably arises. And that’s because it’s a real thing that happens to a reported 75 percent of women of childbearing age. And PMS, among other phenomenon, happens in week four.

There is a veritable laundry list of unpleasant body things that can happen to you during week four. Physical symptoms can include cramps, bloating, breast tenderness, lethargy, headache or migraine, acne flare-ups, diarrhea, constipation, insomnia, and food cravings.

Most of what we complain about when we discuss PMS are mood swings, which can be extreme for some people. These can include anger, irritability, depression, oversensitivity, anxiety, self-hatred, nervousness, and lots and lots of crying — all on a swinging back-and-forth that can go at the speed of sound. This happens due to low levels of estrogen, which cause lower levels of serotonin (which makes you feel happy) and higher levels of stress chemicals.

Some people experience an extreme version of PMS, called premenstrual dysphoric disorder, or PMDD. This is pretty rare, with only around 3% to 8% of women diagnosed with it, but it is no joke. People with PMDD will experience extreme depression a week or two before their periods — on top of all the other PMS symptoms, with their volume turned up. Luckily, this disorder has made its way into the DSM-V, also known as the psychiatric bible, so if you think you have this, a doctor can help treat you.

If you are a human with a uterus, you will most likely feel many if not all of these fluctuations many times during your life. Everyone reacts differently — some people love the feeling of changing, waxing and waning with the moon, while others just grimace through the bad parts and forget they exist until the next month. Do what feels right for you, and don’t be afraid to ask for help from your community, whether it’s getting your best friend to come over with a heating pad and chocolate in week four, or hollering at that cutie to bring over some lovin’ in week two.

This article was originally published on Jan. 7, 2015