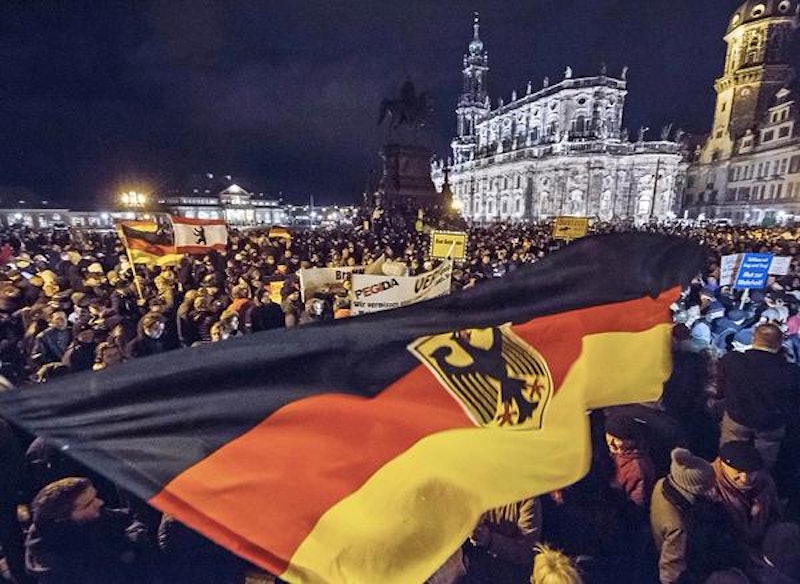 Have you heard about what's happening in Germany? It's pretty worrying — thousands of people turned out in the city of Dresden Monday to march against Islamic immigration into Europe. It was all organized by the so-called Pegida movement, which sounds innocuous enough when written in its acronym form — the full name is the "Patriotic Europeans against the Islamification of the West," which is more telling. Thankfully, the anti-Islam marches in Germany met widespread condemnation from the public at large, with the city of Cologne cathedral's lights going dark in their own act of protest.

This is nothing new for Germany, or for the European right-wing. Anti-Islamic and anti-Muslim sentiment (which can be separate concepts, but in practice usually seem to track pretty tightly) has been prominent on Europe's far-right political scene in recent years, fueled to varying extents by religious bigotry, cultural clashes, and increasing fears about the prevalence of Islamic fundamentalism. Whenever a crime occurs that shows a violent or terroristic expression Islam — the murder of British soldier Lee Rigby in 2013, for example — the cheap, dangerous tarring of entire immigrant populations is often quick to follow.

Luckily, not everybody in Germany is playing ball, not by a long shot. Both from a cultural and political standpoint, Germany has pretty well-understood historical reasons to look dimly on movements like this. While Pegida's limited influence and poor reputation leaves them a far cry from the jack-booted, anti-Jewish reactionaries that paved the way for the Nazi empire, that disgraceful legacy still looms large.

German Chancellor Angela Merkel made her displeasure with the movement plain, calling Pegida "full of prejudice, a chilliness, even hatred" in her New Year's address, according to The Guardian .

Other German cities also hosted actions by Pegida on Monday, but none were reportedly so well attended — Dresden reportedly drew about 18,000 Pegida supporters, while demonstrations in Cologne drew just 250 people, dwarfed by about 2,000 counter protesters. It's a heartening sign that so many people hit the streets in opposition, even though the big turnout in Dresden is basically the opposite of heartening.

Maybe the most striking image from the entire affair was the lights-out protest against Pegida, undertaken by no less than the famous, gorgeous Cologne cathedral. According to The Telegraph, the provost of the cathedral, Norbert Feldhoff, wanted to send Pegida and its supporters a clear message.

You're taking part in an action that, from its roots and also from speeches, one can see is Nazi-ist, racist and extremist. And you're supporting people you really don't want to support.

It's worth keeping a sharp eye on this situation, and on the tensions between the European far-right and Islamic immigrants writ large. However nice it might be to assume that things like this will get better over time, it doesn't always work out that way, and when this kind of vitriol is involved, things can sour quickly.