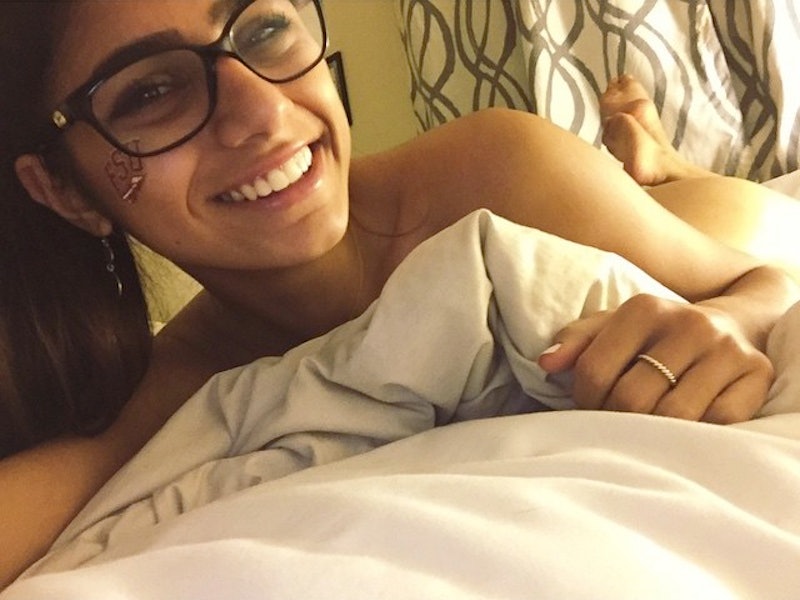 She presents the image that she is defined by both her sexuality and her Lebanese roots. She has a tattoo on her arm that reads "Koullouna lil-watan, lil'oula lil-'alam," which translates to "all of us for our country, for our flag" and is the opening line of the Lebanese national anthem. She also has a tattoo on her wrist of the Lebanese Forces cross. According to the Lebanese Examiner, when she was asked about it, she replied, "I was born and raised there, I’m entitled to an opinion on the politics just like everyone else."

While being a prominent figure in the world of adult entertainment certainly doesn't sit well with Khalifa's compatriots, her display of national pride and unapologetic attitude certainly exacerbate the tension.

One Twitter user wrote, "I am a Palestinian patriot and what you are doing is shameful." Another tweeted, "ur head will be cut soon inshallah." Others posted similarly morbid messages.

However, Khalifa proved that she's not letting any of it get to her. Her responses are actually pretty hilarious and on point.

But some of the backlash is more credible. Khalifa also sparked criticism for wearing a hijab in one of her films. It angered not just traditionalists and extremists, but also those who saw the sexualization of the Muslim headscarf as disrespectful.

Khalifa was not unaware of the risk she was taking, however. It seems that it ultimately came down to the producers' decision.

The moral indignation about Mia Khalifa ... is wrong for two reasons. First and foremost, as a woman, she is free to do as she pleases with her body. Secondly, as a sentient human being with agency, who lives halfway across the world, she is in charge of her own life and owes absolutely nothing to the country where she happened to be born. There is this odd perception that being Lebanese is a vocation and a duty first and that your personal life comes second.

Regardless of the controversy she's stirred, or perhaps because of it, Khalifa is continuing to see her star rise.