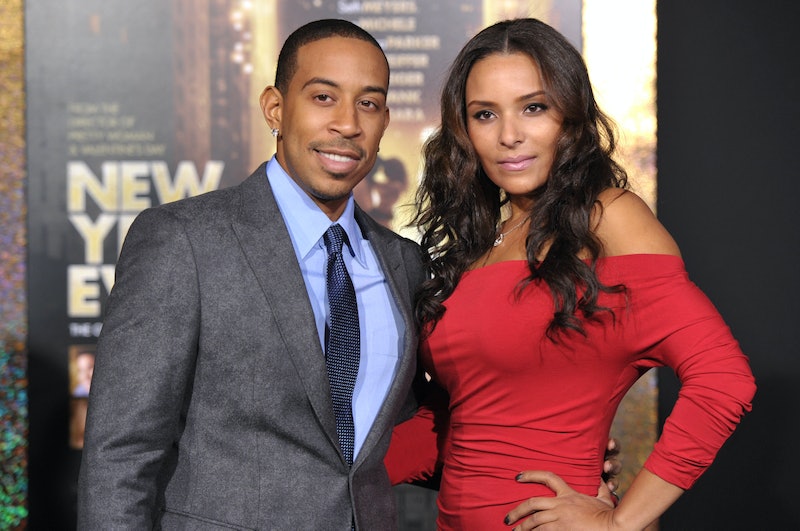 Attention hopeless romantics, Ludacris has married his longtime girlfriend Eudoxie Mbouguiengue just a couple of weeks after popping the question, according to his Instagram posts recently. Ludacris and Mbouguiengue have been dating since 2009, so the engagement (and wedding) aren't really that surprising, but it is kind of shocking to wake up and look on Instagram and see "Whoa, Ludacris is married?"

Just after Christmas, Ludacris and Mbouguiengue went on vacation to Costa Rica, which is when Luda (can I call him that? No?) popped the question. It looks like they didn't even land before he surprised his now wife with the proposal, as he wrote out in a field that the plane flew near "Eudoxie Will You Marry Me." According to his Instagram, not only did Mbouguiengue say yes, she said "HELL YES!" Ludacris also hashtagged the photo "#milehighproposal," which is fun, I think?

Then, less than one week into 2015, Ludacris posted another photo to Instagram of him and Mbouguiengue dressed for a wedding, their wedding! This time, Ludacris captioned the photo "Why wait? Did the thing before 2015. #mrandmrsbridges" and while the photo is adorable, and I'm really in no place to judge, I really hate that he said "Did the thing before 2015." The "thing?" Why "the thing?" I would say that if I were taking my garbage to the trash shoot, not getting married. But what do I know?

Congratulations to the happy couple who did the thing before 2015!