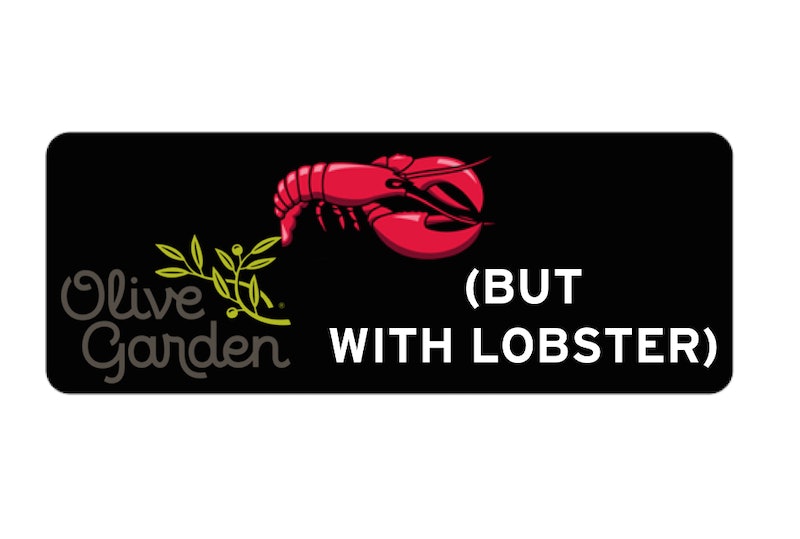 I’m trying to cut back on how much I eat out and order for take-out. I’m essentially becoming my parents’ worst nightmare: a daughter who spends a quarter of her paycheck on meat and dough that has been deep fried. I can’t really help it though (LOL, yes, I totally can, let’s not kid ourselves here): Restaurant food is delicious. It’s ten times creamier, fattier, and cheesier than your sad attempt at chicken alfredo would be at home. You have so much to choose from, even if you’re just ordering from Taco Bell. I'm drunk on choices and saturated fats! My favorite part (besides devouring my blessed paper tub of food, obviously) is getting to pick out where I want to eat. Because there are so many options, because America.

Do you ever specifically crave Panera Bread’s ambience? Or the way McDonald’s cheeseburgers kind of remind you of being placated by your parents when you were 7 years old and obscenely out of control? I know we crave the food, but we also crave the brand. Every restaurant has its own personality. For instance, you actually can feel yourself become drunk as soon as you set foot into a Denny’s; Those flickering lights and booths that remind you of tired motel carpets will always bring you right back to every great, boozy night with friends that ended in a greasy calorie-fest.

The reasons we eat at certain restaurants, even though we know better, are easy enough to understand. What is less clear, however, is the true nature of these establishments based on their names alone. So I thought I would help you out, based on my own years of "hard research". Here are some of our favorite restaurants with names that probably represent their identity a little more accurately:

1. Chili’s: "If A Motivational Quote Or Eagle Is Your Facebook Cover Photo, And You Don't Mind Pasta Being Called 'Zesty,' Then You Will Love It Here"

2. Taco Bell: "Because Actually Dealing With My Feelings Is More Expensive"

4. Subway: "I'm Only Here For the Subway Smell, Which Is Impossible To Recreate And Believe You Me, I've Tried"

7. Applebee’s: “We’re Not Sure How We Ended Up Here, But This Strawberry Lemonade Is Undeniably Delicious”

8. Panera Bread: “Where You Gossip About Disappointing Family Members With Your Mom”

10. Chipotle: “This Burrito Is 80% Rice, But I Would Still Marry It Over Any Man Or Woman”

11. Outback Steakhouse: “Where Your Mega Thirsty Ex-Boyfriend Took You On Your First Date”

12.Cheesecake Factory: “I Ate Cucumbers For Two Days To Make Room For This Feast”

13. Red Robin: “You Might Get An Epileptic Seizure, But The Burgers Are Okay”

15. Panda Express: “Just Try Walking Past A Waft Of Orange Chicken And Not Feeling Like You Will Die Unless You Order Some”

16. Long John Silver’s: “If This Place Made It Through The '08 Economic Crash, Then You Can Make It Through Anything”

17. Friendly’s: “Remember That One Time It Was Really Good?”

18. Ruth’s Chris Steak House: “Where Your Marketing Boyfriend Named Jason Took You For Your Six-Month Anniversary”

19. Sbarro: “Only Still In Business Because Of That One Office Episode”

25. Popeye’s: “Way Underrated And Better Than KFC, I Swear”