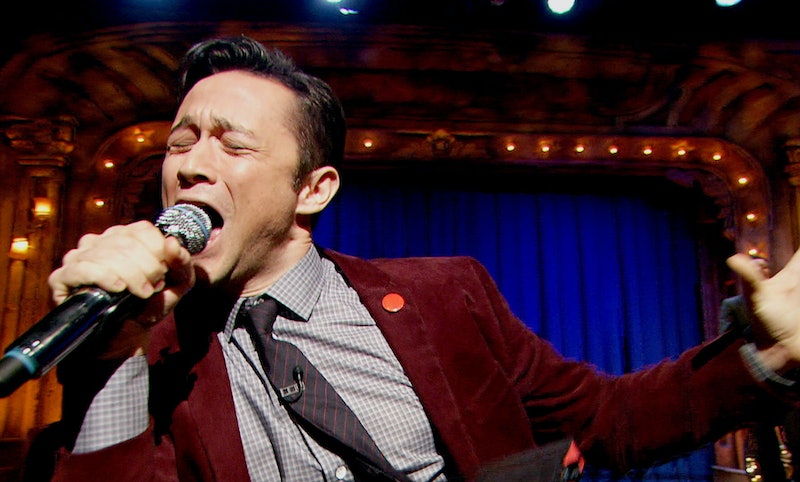 Joseph Gordon-Levitt is already your imaginary boyfriend because he writes movies like Don Jon, wins cute-offs with kittens, and (oh yeah) he's a damn good actor. But then he had to go and himself that much more worth of our adoration by going on Late Night with Jimmy Fallon and wiping the floor with Fallon and Stephen Merchant in another edition of the Lip Sync-Off.

As you may remember, John Krasinski (your other imaginary boyfriend) hold the title for most adorably, incurably fantastic lip sync performance. His rendition of "I'll Make Love To You" by Boyz II Men was so good, the collective sighs of charmed people everywhere (probably) raised the Earth's temperature by a few degrees. Yes, it was that good.

Now, here comes JGL with a challenger of a performance, first going full rock star with "Tiny Dancer" and then bringing it on home with a surprisingly amazing rendition of "Super Bass" by Nicki Minaj. And with that, it's so on. Your imaginary boyfriends are throwing down for an imaginary fight, girl.

We can't actually give you the video, because someone (who is now my least favorite person ever, whoever you are) decided that the clip of Krasinski lip syncing his way right into everyone's hearts has been removed from the Internet. But you know the song, and GIFs are forever.

And here you have it, Joseph Gordon-Levitt, making you love him more than you already do.

Who wins? Probably John Krasinski. Or JGL. To hell with it. Everyone wins. The more imaginary boyfriends, the merrier, right?