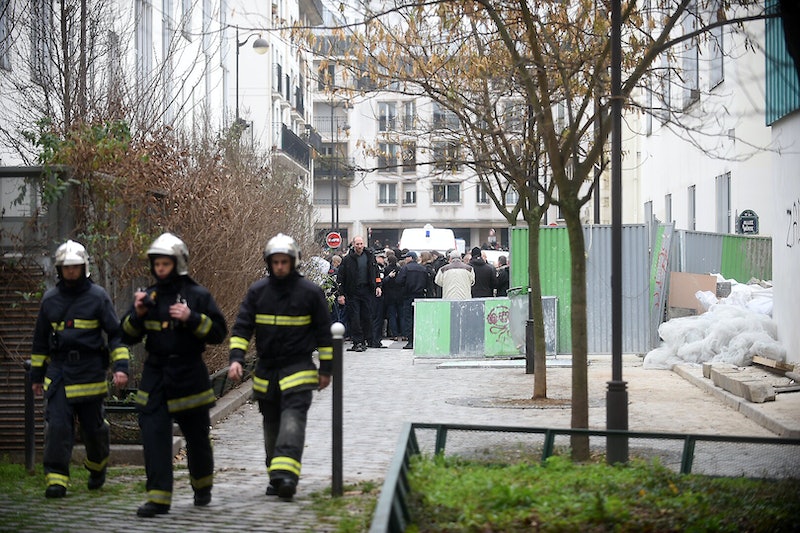 As many as 12 people were killed on Wednesday when masked gunmen attacked French satirical newspaper Charlie Hebdo in Paris — and escaped. At least four people were left in critical condition. France has raised its terror alert to the highest level in the wake of the attack, and places of worship, stores, and other media have been reinforced.

Witnesses report that three masked gunmen entered the office in the 11th arrondissement around midday armed with Kalashnikov rifles and pump-action shotguns. Video circulating online shows the gunmen shouting ‘‘Allahu akbar!’’ as they entered the office. Paris police spokesman Rocco Contento said that the gunmen stole a car after the attack and police were in pursuit. The attackers have since hijacked a second car, turning the driver of the first evidently hijacked vehicle out onto the street.

French President François Hollande arrived at the scene shortly after the attack, calling the deadly incident a "terrorist attack" and asking the country to stand united. At least two of the dead are policemen, and the force now searches for the at-large gunmen. At least 40 people have been evacuated from the building.

Charlie Hebdo was known for facing threats and critiques with even more outlandish behavior. Guardian reporter Kim Willsher tweeted from the scene that police have been aware of targeted threats to the media as of late, and had been providing protection for the paper.

This is not the first attack on the office. In 2011 it was firebombed after publishing a caricature of the Prophet Mohammed and naming him the paper's guest editor. The cover, which featured the Mohammed caricature, promised "100 lashes if you are not dying of laughter." The newspaper was sued by two Muslim organizations in 2006 for incitement to hatred when it republished Danish cartoons depicting Mohammed. The suit was thrown out by French courts.

A police car, reportedly at the scene, is riddled with bullets from a Kalashnikov.

French journalist Gilles Klein posted this news image, which shows the gunmen. "We have avenged the Prophet Mohammed. We have killed Charlie Hebdo."

This is the last tweet from the newspaper — it's unclear if it was before, after, or during the attack. The cartoon depicts an ISIS leader Abu Bakr al-Baghdadi giving best wishes for 2015 and good health. Charlie Hebdo posted it with the message, "Best wishes, by the way."

In this week's edition of the paper, celebrated cartoonist Stéphane Charbonnier, known as Charb, published this cartoon. It reads: "Still no attacks in France." "Wait! We have until the end of January to give our [New Year's] greetings."

In a statement, President Obama said: "Our thoughts and prayers are with the victims of this terrorist attack and the people of France."