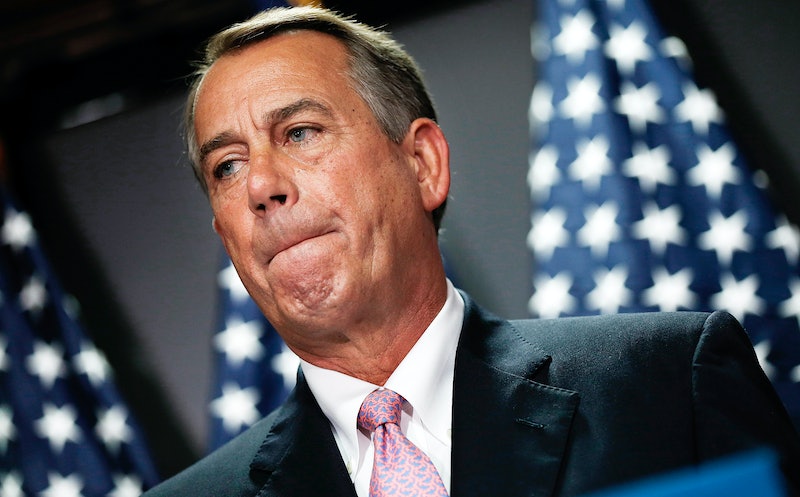 On Tuesday, the 114th Congress opened with Republicans re-electing House Speaker John Boehner for a third term. The speaker was expected to win, but there was some dissent inside the House, with more conservative members voting against him. Boehner abstained from voting in the election, instead opting to remain in his office — a sign of his confidence in maintaining his position for another two years and dismissing those choosing to defy his leadership.

Not surprisingly, Boehner's position was secured by 11 votes beyond the required number. 25 members dissented, with some nomination choices even being met with laughter. Many members were unable to partake in the opening day of Congress — some were at the funeral of former New York Governor Mario Cuomo, or were unable to make it to Capital Hill due to weather.

As reported by the Hill, the speaker wrapped up the day by addressing his colleagues: “Every day you and I come out here, try to plant good seeds, cultivate the ground and take care of the pests.” Despite the infighting, and some "pests" who defied the norms, Republicans will have to put aside infighting as they prepare to meet the challenges of their Democratic counterparts.

But who were the other contenders for the position? Some nominated and voted for themselves, while others had one-man fan clubs.

Gaining the most votes at 12, Webster was the most viable contender. His name was a last minute addition and gained traction among House members.

He appeared to be just as surprised by his nomination as the public.

Gohmert was the most vocal opponent to Boehner, and started collecting votes days before the election. He only received 3, including himself. Gohmert has made more than a few controversial comments. During the Ebola outbreak, he asserted that the head of the Centers for Disease Control and Prevention was the "commander of the Democrats' new war on women nurses" because he threw them "under the bus" as the agency responded to Ebola.

The second man from Florida to be nominated and receiving two votes, he has been in office for only one year — a freshman seeking a senior position. Hopefully, he doesn't get in too much trouble at lunchtime. Though it appears that he is having a hard time with his committee placements.

Yes, it is possible for someone to be elected as House Speaker who is not a member of the House. He was the first of two nominations from the neighboring Senate. He received one vote.

Paul is the favorite of many for the 2016 Republican primary, but only one man dreams of a Speaker Paul. Had he won, it would have certainly been another position to add to his resume for an office in the White House.

The ultimate winner tweeted about his qualifications to run the House.

That's hard to argue with. He must have put up with many debates in his childhood home, and will continue to in his House of work.