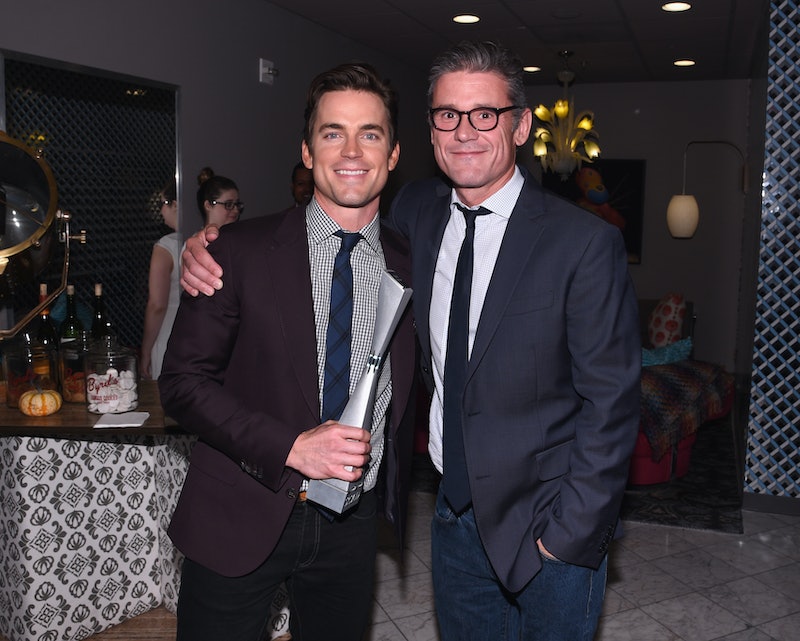 Now that Matt Bomer is nominated for a Golden Globe for his incredible role oin The Normal Heart, we can expect to see more of his man, Simon Halls, by his side on the red carpet. Bomer came out in 2012, and I was surprised to hear that he was already happily married with three children! Aren't we supposed to believe the fantasy that one day our favorite actors will fall in love with us because they're all clearly very heterosexual? Well, obviously that's not the case, and my surprise at hearing about his marriage and family quickly turned to ~emoji heart eyes~ as I read the comments that Bomer made about his "secret" husband he'd been keeping so private throughout his career. So, who is Matt Bomer's husband Simon Halls? Let's get to know him a little better.

Besides being one of the luckiest men on planet Earth, Halls has made quite a name for himself in the PR world in Hollywood. He left his previous firm, PMK, when they merged with brand-PR agency BNC in 2010, and went on to start his own highly successful PR firm with some of the biggest Hollywood names as clientele. He combined forces with fellow publicity heavy hitter Stephen Huvane to open up Slate PR, which Business Insider named number one in their list of Most Powerful Publicists in Hollywood. In Simon Halls' LinkedIn, he lists the University of South California under his education and is part of an alumni group from a boys prep school, Crescent School, in Toronto, Canada.

According to an article on Queerty, Halls was apparently Bomer's publicist before they got together. In an interview with Details, Bomer shared that he and Halls have been married since 2011, which comes a year before Bomer publicly came out during his acceptance speech at the Desert AIDS Project’s Steve Chase Humanitarian Awards in 2012. In the speech he shared,

I'd really especially like to thank my beautiful family: Simon, Kit, Walker, Henry. Thank you for teaching me what unconditional love is. You will always be my proudest accomplishment. God bless you.

Bomer and Halls have been notoriously private about their family life, so that loud proclamation from the actor came as a shock for many. The happy couple are parents to three adorable young boys: Kit, Walker, and Henry. And just to put the cute factor over the edge, I suggest you watch their ALS Ice Bucket Challenge video. I commend Bomer and Halls for being so wholly devoted to their family and it is clear that regardless of how big they are in the business, their love and children are what matters most.

Bomer told OUT magazine about what his wedding to Halls meant for them:

It was very small — only our nearest and dearest. There’s a security, a validity of knowing that it’s legal. It’s hard to put into words. It’s just a feeling, I guess — something about saying vows in front the people around you who love and support you. I think it was good for our family.