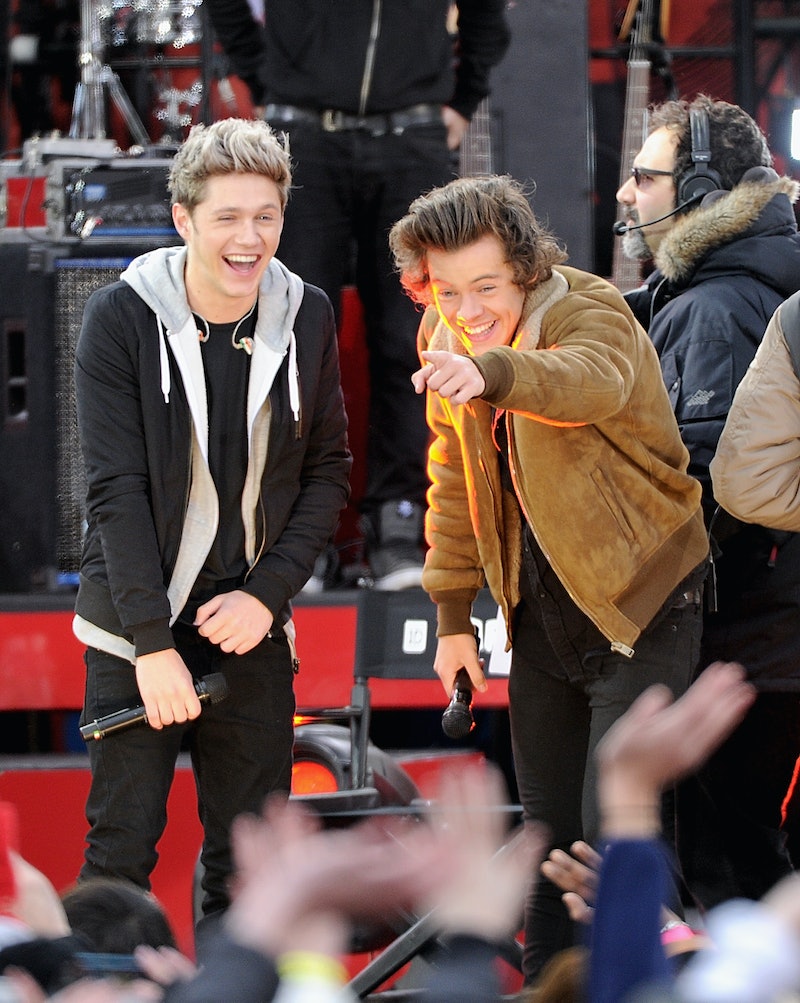 What better way to kick off 2015 than an ode to the beloved Narry Storan? I have already shared a bit about my love for these two superior members of One Direction (actually, can all five be the best?) but it truly does seem like Harry Styles and Niall Horan are, in fact, the most genuine BFFs in the band. They don't mind showing their public affection and joking at each other's expense, and Harry Styles, as usual, has taken things up a naughty notch, and it's not the first time. A few days ago, Horan posted a tongue out selfie to his throng of fans, and some super-sleuths apparently caught Styles leaving quite a dirty comment on Horan's selfie.

And what did the cheekiest member of One Direction have to say to his bandmate? Oh, you know, just politely asking Horan if he "could sit on his face...please?" GASP! Well, since it doesn't take much to send Directioners into a frightening tizzy (see: tribute band) fans immediately started reacting and making all sorts of assumptions about the comment. Some have even claimed that Styles' naughty comment was photoshopped, but I beg to differ. In some of the screencaps, you can totally see fans comment directly to Styles in shock and disbelief.

Many also claim that this is out of character for Styles, but really? Have we not seen how suggestive he has been in the past? My assumption is that Styles knows his power on social media and was merely posting a silly joke on his BFFs page. And since these two seem to be so close to each other, I've gathered some of the other times that Styles and Horan have been the, ahem, most intimate members of One Direction.

That Time They Danced Together in Their Hotel Hallway

Putting aside the silent creepiness of this video and the fact that someone, somehow, got this footage (I don't want to know how), the boys seem to be celebrating something and who rushes out to do a little funny dance with a shirtless Harry Styles? Niall Horan, of course!

If you don't get incredible seasick by this fans video, skip to :31 seconds where Niall slightly kneels and gives his BFF some red roses. I think the girls loved it, don't you?

The popular question of whether Styles is bisexual, gay, or straight continued with this interview with The Sun, when the boys were asked about women or men they've been rumored to sleep with. Horan seems uncomfortable with the subject when Styles consoles his friend by saying not to knock it until he's tried it. He's got a point there.

When Harry Grabbed His Junk on Stage

...and stared directly into Horan's eyes.

When They Realized Their Spoons Fit

Harry said that he'd "do Niall." Alrighty, then.

...and then kissed his foot afterward.

Harry quickly answered "Niall!" only to look slightly concerned to share so much information.

When Niall Sat on Harry's Shoulders for a Chicken Fight

When They Reacted a Famous Movie Scene

When Harry Gave Niall a Birthday Tribute on Stage

He proceeded to turn all of our hearts into mush.