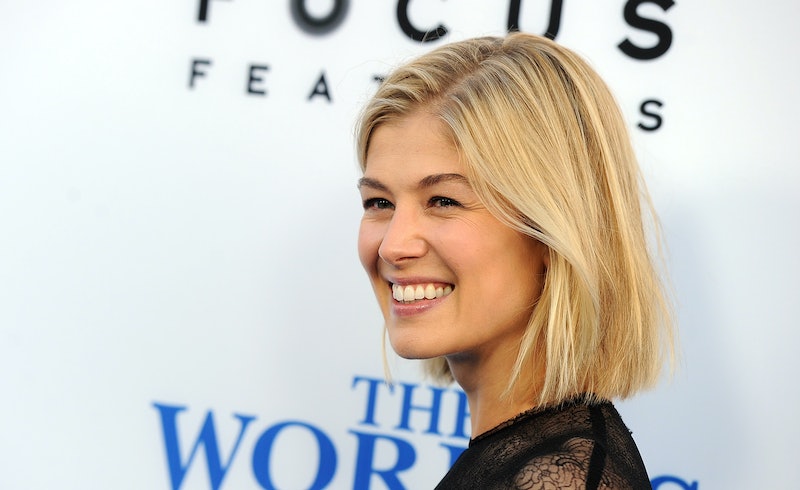 Actress Rosamund Pike officially became a household name in 2014 for her stunning performance of the unstable character Amy Dunne in the film adaptation of the bestselling novel Gone Girl. Somewhat unsurprisingly, Pike has been nominated for a Golden Globe award for Best Actress in a Motion Picture, Drama for her portrayal of the one and only "Amazing Amy," an unreliable narrator who is part of a tumultuous marriage. As the awards show approaches, some fans might be wondering who Rosamund Pike's real life boyfriend, Robie Uniacke is, and what their connection is like.

Pike has reportedly been dating researcher Robie Uniacke since late 2009, according to Glamour UK. Uniacke is described in the article as a "reformed drug addict-turned-businessman," who has been married twice before and has four children from those marriages. Though it has not been revealed what specific company he works for now, The Telegraph described his title as "mathematical researcher" last September when Pike opened up to the British paper about her beau. In the interview, Pike gave Uniacke credit for helping her bring focus to her acting career. Though he is often described by the press as "mysterious and elusive," it's a good thing to see a man leave his dark past behind to support his partner in achieving her goals.

Uniacke was previously married to Emma Howard, the daughter of the late Earl of Carlisle. It was a marriage that reportedly ended unhappily, and the two both checked into rehabilitation clinics to work on their respective addictions. Later, Uniacke married an interior designer, which also ended. A friend of the couple said that he often gets bad press despite his years-long relationship with Pike.

But Pike spoke very highly of her man to The Telegraph, whom she now has two children with, as "interesting" and "fearless."

Though the actress said that she is passionately driven in terms of her career, she said it was Uniacke's mind that helped her in the way she approached portraying different characters on the big screen:

I have a very clever partner who’s got a very astute mind and is very, very well read and articulate and ruthless about how something I do might play out on screen. My tendency is to identify with a character and imagine there is more on the page than there is. He’s quite good at putting a check on that.

Though Uniacke seems to have kept more details of his personal life under wraps, it is good to know that he has not only moved on but also moved forward past his addiction to have a successful career. It's also great that he has helped Pike move forward in her work as well. It should be no surprise, then, to see him cheering her on if she ends up snagging the Golden Globe award. Hopefully we'll catch a glimpse of his proud face in the audience if she does!

More like this
Kaya Scodelario Always Posts The Sweetest IGs About Her Husband
By Kadeen Griffiths and Darshita Goyal
Blake Lively & Ryan Reynolds’ Relationship Timeline Includes 4 Baby Bumps
By Jake Viswanath
What Is Miles Teller’s Net Worth? The 'SNL' Host's Bank Account Is No Joke
By Meg Walters
Lin-Manuel Miranda & Tituss Burgess React To 'Little Mermaid' Casting Backlash
By Radhika Menon
Get Even More From Bustle — Sign Up For The Newsletter