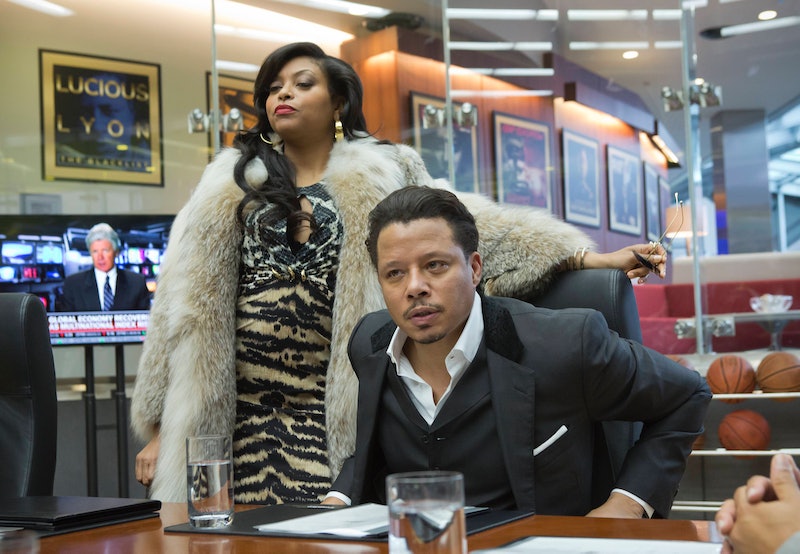 There's probably no other premiere more anticipated this winter than Fox's music industry/family drama Empire — well, aside from the final season of NBC's Parks and Recreation. The major four broadcast networks reportedly got into a huge bidding war over the new series from acclaimed director Lee Daniels (The Butler, Precious) and screenwriter Danny Strong (Game Change, The Hunger Games: Mockingjay Part 1, and, yup, Jonathan on Buffy) — with Fox winning. Empire , which premiered Wednesday night, reunites Terrence Howard and Taraji P. Henson on-screen. Previously, they won over audiences as a couple in the Oscar-winning movie Hustle & Flow. Even with all those big names and expectations behind it, Empire totally lives up to the hype.

Howard drives the story as Lucious Lyon, a former drug dealer and now CEO of Empire Entertainment. He's wondering which of his sons he can leave his hip-hop business to: Andre (Trai Beyers), the power-hungry one who is married to a white woman; Jamal (Jussie Smollett), the talented gay songwriter who Luscious wants to be straight; and Hakeem (Bryshere Y. Gray), the youngest and a loose cannon hip hop star-on-the-rise. Or will Lucious' ex-wife Cookie (Henson) take it all over now that she's been released from prison and wants a piece of a company she also considers to be hers?

Empire is sleek and fast-paced, jumping around from soapy story to story — Cookie vs. Lucious, Lucious vs. his sons, and exposition flashbacks — with twist after twist, from Luscious' ALS diagnosis to Cookie's plans for a take over. It makes for an incredibly packed hour. Smollett is an absolute joy to watch in his scenes, especially when he sings, and here's hoping this is his breakout role as both an actor and musician. Henson also shines as the fabulous and out-for-money Cookie. There isn't much interaction between Luscious and Cookie's sons, but I hope that's something we can see more of throughout the rest of the season.