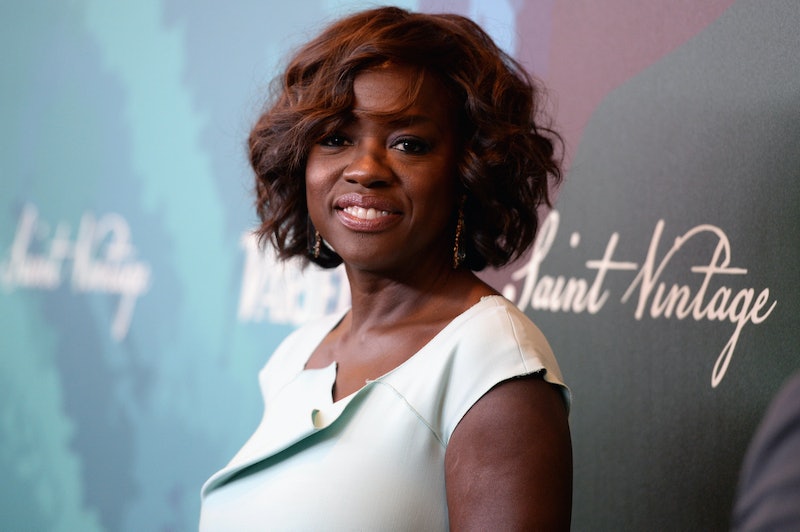 Here's an undeniable fact: Viola Davis is pure perfection. It looks like the fans voting in the People's Choice Awards agreed, because Davis took home the trophy for Best Actress in a New Series for How to Get Away With Murder at the awards telecast on Wednesday night. One of the best things about Davis winning this award is that all other past winners in this category have been white throughout the year. Not only is Davis the first woman of color to take home this particular trophy, but the category was also one of the most diverse of the telecast.

Davis was up against past co-star Octavia Spencer for Red Band Society, Tea Leoni for Madame Secretary, Debra Messing for the pretty terrible Mysteries of Laura, and Jada Pinkett Smith for Gotham, and she took home the trophy thanks to her incredibly fierce and fantastic performance as criminal law professor and lawyer Annalise Keating.

After winning the award, Davis walked onto the stage looking like a pure perfect vision in a beautiful hot pink dress and accepted the trophy with class and poise. She thanked Shonda Rimes and the show's staff with a nod to the controversy from 2014, when a New York Times reporter claimed Davis was "less than classically beautiful", by saying "Thank you for thinking of a leading lady who looks like my classic beauty."

While Davis' performance as Keating is constantly perfect in its balance of strength and vulnerability, and in her sheer fierceness and dedication to the part, it's also memorable for being one of the first great roles to show a real African-American woman in every way. But, let's be honest, she also probably took home this role because of this line: