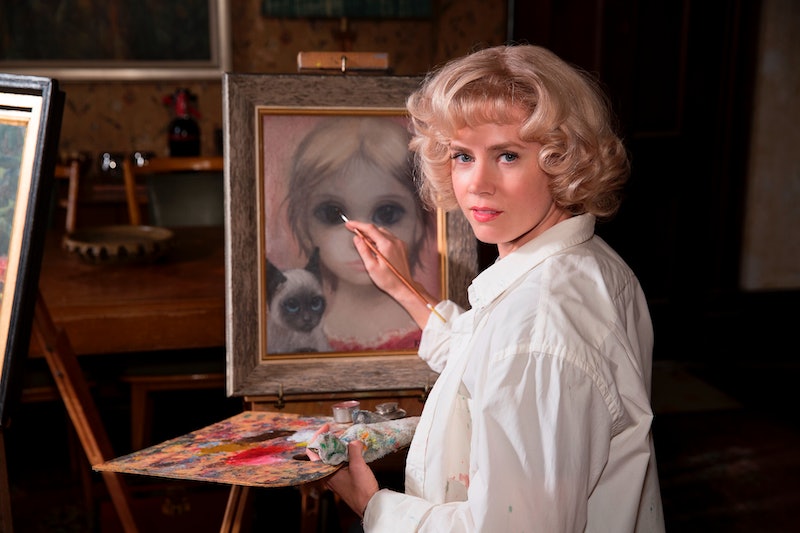 The actors who impress me the most are the ones who transform themselves for every role. Sometimes it's a complete 180, while other times it's a subtle change that blurs the lines of where they end and the character begins. The latter particularly happens in biopics, and one of the most impressive this year was Big Eyes, in which Amy Adams deserves to win a Golden Globe for her portrayal of artist Margaret Keene. Although the role itself was subtle — Margaret was a quiet and reserved woman, which is why her husband Walter was able to take advantage of her for so long — there were small nuances that Adams included to fit the role to a tee. It wasn't just an accent or a haircut that made Adams believable, but the emotions she showed during a conversation, sometimes even as she was in the background of a shot while Walter (played expertly by Christoph Waltz) carried on about himself at an art gallery.

The big turning point in the Keene's story (and in turn, the film) is when Margaret decides to stand up for herself and reveal that Walter is a huge fraud. This is, of course, after many years of being psychologically abused and trapped in a room painting for him, so Adams had to skirt the line of playing the victim. During a press conference, Adams said that she made sure Margaret takes a "sense of ownership in the deception," with credit and responsibility for what happened instead of making it all about Walter. So even though you feel badly for what happens to her, you also understand that she is the one who kept the lie going for so long because she wasn't strong enough to change things. That part of the role is one of the most difficult in my eyes, because if Margaret just seemed steamrolled the whole time and then suddenly popped up to take him to court, it wouldn't make sense. Seeing Margaret transform and her journey to making a name for herself was portrayed without all the drama, and the subtlety from Adams is what made it work.

Perhaps Adams did so well with this film because she felt like it was the right role for her. She told reporters that she emailed Tim Burton personally to get involved with the project and that she was at ease the whole time filming. "I was so relaxed on set, which I don’t think I should have been, but I felt like I was part of something bigger than just what I was playing," she explained. That "something bigger" also included some feminist movements from Margaret, even if she didn't realize she was participating in them. Overall, as the film unfolds, Adams' acting becomes even more impressive. Part of that is due to a great story and script, but she really became one with the character and told this story powerfully. As I said before, sometimes that was with a subtle disappointed look when her paintings weren't selling or the quiver of her voice on a phone call, and other times it was genuine fear as she fled from Walter or anger as she tore her art down from a wall. All in all, she was absolutely captivating, all while making me constantly wonder whether I should be rooting for Margaret or shaking some sense into her. A bit of polarizing feelings never hurt anyone.

So even though I adored Emily Blunt in Into the Woods and have nothing but respect for Helen Mirren, Quvenzhané Wallis, and Julianne Moore, I think this is Adams' year for a Golden Globe win. She took one home for her show-stopping performance in American Hustle last year, but somehow lost out the prior years for Enchanted, Doubt, The Fighter, and The Master. She deserves to win twice in a row to make up for lost time, but more importantly, because this was a story that needed to be told and she did so perfectly.

More like this
Anya Taylor-Joy Might Be Engaged To Her Musician Beau
By Jack Irvin and Sophie McEvoy
What Does The Presley Family Think Of 'Elvis'?
By Arya Roshanian
Chris Hemsworth Joked That Baring His Butt In ‘Thor: Love And Thunder’ Was A “Dream”
By Brad Witter
Photos Of The 'Elvis' Cast vs. Their IRL Counterparts Will Have You All Shook Up
By Grace Wehniainen
Get Even More From Bustle — Sign Up For The Newsletter