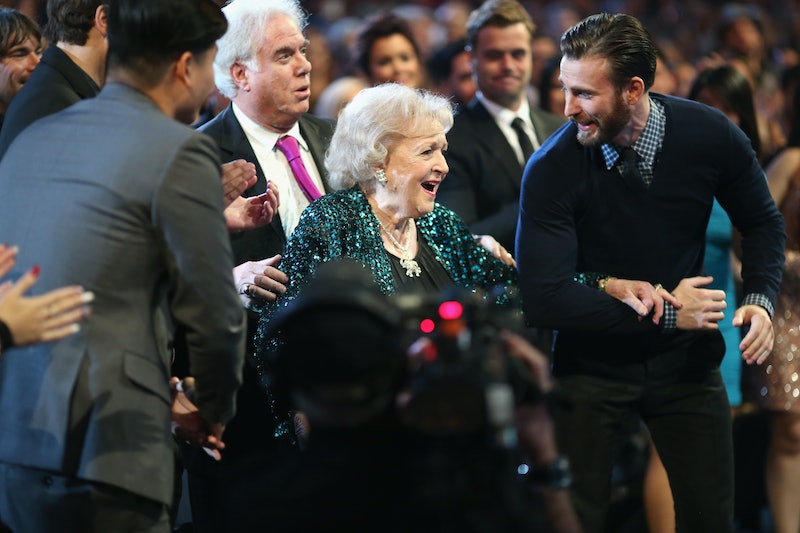 When Chris Evans helped Betty White at the People's Choice Awards, the world's collective heart basically exploded from his chivalry. We shouldn't be surprised that he's this sweet in real life considering that Captain America is such a chivalrous gentleman, but it's always nice to see that life imitates art so perfectly. However, this was far from the first time that Evans did something so swoon-worthy and nice for a woman. Although he's played some real sleezebags in movies, in real life all he does is open doors for ladies, escort them onstage, and gush about how he wants to grow old with someone who feels beautiful without makeup. Basically, he's the perfect man, and he's been proving it for years. When they were casting The Avengers, they probably found out that he was Steve Rogers in real life and it made everything really easy. The same likely happened with Robert Downey Jr. as Iron Man, too.

To help you fully understand Evans' amazingly sweet gestures, I've rounded up six times he proved that chivalry isn't dead. If you didn't love him before, you're going to fall head over heels now. But don't worry — he'll be there to catch you before you hit the ground.

When He Was the Perfect Gentleman For Betty White

He is seriously a real-life superhero.

When He Lent Scarlett Johansson His Arm

I know it's customary for men to do this for women at award shows, but he does it so that she's the center of the spotlight.

And Did the Same For Kristen Bell

All the attention on her. Adorable. He also took one for the team later and touched the slime-covered winners' envelope so she wouldn't have to.

When He Swept Up the Mess on the Avengers Set

Whistle while you work, Captain America.

When He Brought His Mom to the Oscars

And I bet he introduced her to everyone as his "wonderful, perfect, sweet mother."

When He Said He Wants a Woman to Grow Old With

"It's going to be a long life, you need someone to grow with," he said of his dream woman. He also described how he wants his lady to feel beautiful in no makeup. "I like sneakers, I like ponytails, I like sweatpants. I know a lot of guys say that, but I really mean that … I genuinely enjoy a girl that can wake up and wear no makeup and be OK to step outside and not be worried about what the public thinks." Swoon.