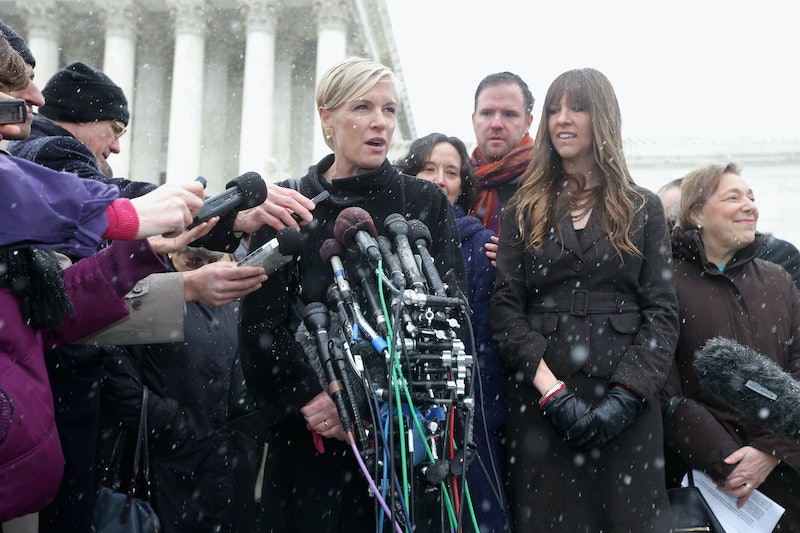 The U.S. House of Representatives returned to the halls of Congress on Jan. 6 with a mission. No, not to create jobs or services for the American people — or, at least, not just that — but to limit access to abortion. What has long been a pipe dream for many right-wing politicians may be inching closer to reality in 2015.

On the first day back, Reps. Trent Franks (R-Ariz.) and Marsha Blackburn (R-Tenn.) reintroduced the Pain-Capable Unborn Child Protection Act, a measure that criminalizes abortion after the 20th week of pregnancy except in cases of incest, rape, or when a woman's life is in jeopardy. The bill previously passed the House in 2013, but stalled in the then-Democratic Senate. Now that the Senate has flipped — and reproductive rights lobbyists expect the Senate breakdown to be 54-55 on anti-abortion rights votes — anything goes.

Gonen tells Bustle the 20-week abortion ban will be "the major priority" for the Center for Reproductive Rights in 2015, but she doesn't see the fight stopping there — and of course, it hasn't. After several Republican women criticized the bill's rape exemption clause, which would only apply to rapes that were reported to police, the GOP pulled the 20-week ban and replaced it with an insurance-coverage abortion ban in a move that Jessica the National Latina Institute for Reproductive Health called "a bait-and-switch that occurred under cover of darkness."

The Bill Just As Damaging As An Abortion Ban

The No Taxpayer Funding for Abortion and Abortion Insurance Full Disclosure Act would make the ban on federal funding for abortion permanent; bar certain health facilities, including those on military bases, from offering abortion services; forbid multi-state insurance plans under the Affordable Care Act to cover abortion; and raise taxes on small businesses that provide health insurance packages with abortion coverage. The bill easily passed the House on the 42nd anniversary of Roe v. Wade.

And it definitely won't be the last anti-abortion bill getting star treatment in the halls of Congress. Gonen tells Bustle that we're likely to see a slew of "hostile" bills targeting funding to abortion and other reproductive health services. There's already efforts underway to defund Planned Parenthood, restrict abortion care to low-income women and chip away at the Affordable Care act — or, as Gonen explains, "withhold health care [Republican legislators] don't agree with."

While reproductive rights are at stake more than ever in 2015, activists are confident that there will be enough pushback against anti-abortion and anti-contraception laws at the federal level. Gonen and her colleagues point to a recent report on the 113th Congress that underscored a "renewed energy on policies that promote equitable access to health care [and] support women and families."

How Activists Are Fighting Back

Abortion rights were "under attack" in the 112th Congress, Gonen tells Bustle. "That didn't really slow down [in 2014], but the pushback was encouraging."

Activists believe that momentum will carry into 2015, where several pro-active women's health measures have either already been introduced or are expected to make their way through the Congressional chambers. Among these measures are the Women's Health Protection Act, which was reintroduced in January, and the Not My Boss’s Business Act, which would help restore birth control coverage following the troubling Hobby Lobby ruling.

Although lobbyists are relying on their pro-choice advocates in the Senate — as well as President Obama, who has reaffirmed in recent weeks that he will veto any anti-abortion bill that comes across his desk — a network of on-the-ground activists are mobilizing across the United States, increasing pressure on their representatives in Washington. Representatives from Planned Parenthood tell Bustle that the organization has grown to eight million supporters, with significant surges occurring in the abortion-rights battlegrounds of Texas, Florida and Colorado.

All* Above All, Catholics For Choice, And More

A number of other organizations, such as the reproductive justice coalition All* Above All, have already begun letter-writing campaigns and the like, targeting anti-abortion legislation So far, All* Above All has sent roughly 16,000 letters to the president, urging him to lift funding bans on abortion, including the Hyde and Helms amendments.

Catholics for Choice, adding a pro-faith, pro-choice voice into the mix, has also been campaigning heavily against this new round of anti-abortion legislation from a religious-based perspective. On the anniversary of Roe v. Wade, the organization published an emotional full-paged ad in Politico that featured Alicia, a Catholic woman who had an abortion at 23 weeks after discovering her unborn son had a severe fetal impairment.

The Catholic-centric nonprofit also joined 29 other religious organizations in a letter opposing the 20-week ban. "Health care that does not include access to later abortion does not serve the economic, medical, or emotional needs of women or our society as a whole," the groups wrote.

And just last week, Planned Parenthood President Cecile Richards sent a letter to every member of Congress, highlighting the importance of safeguarding women's health and access to affordable contraception and abortion. Richards wrote:

As a country, we have made tremendous progress in public health outcomes. In particular, improved access to a full range of birth control services has resulted in a twenty year low in teen pregnancy and abortion rates. Advances in women’s health have paved the way for women to be a driving force in our economy, and reproductive health access is directly related to women’s economic well-being. There is also broad consensus (78%) that government should not interfere with private decisions that a woman makes with her doctor.

At Planned Parenthood, we are proud of the role we have played for nearly 100 years in providing high-quality, affordable reproductive care for women. We’re eager to work with all Members of Congress to build on this progress and move forward to advance women’s health care access.

While activists continue to rewrite the narrative, focusing on the positive measures that would expand access to reproductive health services, the threat of abortion bans lingers. The 20-week ban may have been shelved, but it has yet to be defeated.

Meanwhile, the passage of the no-taxpayer funding bill and continuous support of the Hyde Amendment jeopardizes millions of low-income women nationwide. According to reproductive rights activists, this fight is becoming less and less about good and bad policy, and more about the everyday lives of women.

"We know first hand what happens" when women lack reproductive health care, Gonen says. "Now we're taking those experiences up to The Hill."