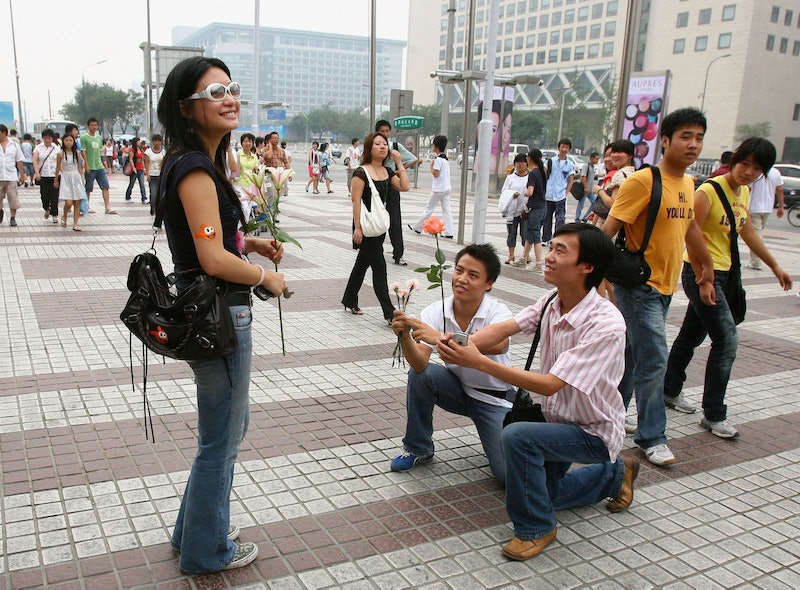 Choreographed flash mobs. Professional videographers. Live broadcasts. Thousands — no, millions — of YouTube hits. To me, these are the makings of an overproduced Super Bowl Halftime Show. Not a marriage proposal.

And yet, we’re seeing it more and more: men going to great lengths to pop the question, from this movie trailer to a Glee-themed flash mob to the guy who spent four years traveling to 26 countries to make his proposal video. Call me a curmudgeon, but isn’t it all a bit much?

Don’t get me wrong: I’m a romantic at heart. Before my now-husband proposed, I had grandiose ideas of what it might be like to see him get down on one knee. But that vision never included a thousand costumed strangers.

As it turned out, he asked me to marry him in bed at 6 a.m. while I was half asleep — my retainer still in place — before we went scuba diving in Belize. For me, this ended up being perfect. Because, really, it’s not about how you ask, it’s about what you’re asking.

I’ve told our low-key proposal story at least 50 times at this point, but the story isn’t the point. It’s the decision to get married that matters. Everything else is just details. Or, perhaps, a distraction.

Turning “the ask” into a performance devalues the question.

While I’m not trying to hate on men who went to great lengths to propose, I suspect these guys spent more time perfecting their dance moves than considering the decision to spend their lives with another human. (And you have to wonder: Do they make these videos in the hopes that they go viral and thus allow them to achieve Internet celebrity? Because yikes.)

The whole thing kind of reminds me of the way medieval knights used to joust in order to “win” an onlooking lady’s hand. Today, a guy shows off his skills of creativity and hard work while his girlfriend passively sits there and watches.

In fact, it’s these old-school roles that make proposing in general quite confusing in today’s world. In a time when women continue to fight for equal pay, equal opportunities, and equal rights, doesn’t the idea of a man proposing sound awfully antiquated?

Personally, I struggled with the idea of my then-boyfriend taking the reins on what seemed like a hugely important life decision. But, like I said, I’m also a romantic, and I worried that I would regret not getting the proposal I felt that I — and every woman, for that matter — deserved.

Fact is, the majority of us ladies enjoy being proposed to. Only 37 percent of (straight) women are down with popping the question themselves, and 25 percent actually think the proposal is more important than the marriage ceremony itself. So I don’t think this tradition of the guy doing the asking is going away anytime soon.

And, you know, that’s okay. But let’s keep it real.

It’s time to get back to basics with this whole getting-engaged thing. These over-the-top proposals skew the intended purpose by setting the expectation that it’s what men should do and what women want. It puts pressure on men to deliver something exceptional and on women to say yes with unabashed glee.

My hope is that this trend of overproduced, one-sided proposing will eventually die out and a more egalitarian model — perhaps a dual proposal with a mutual declaration of love — will become the norm. Because, really, proposing marriage shouldn't be a secret sprung on a woman (via flash mob or otherwise), but a conscious decision both people make together.

Hey, a gal can dream.

You Might Also Like:Are You Cheating...Financially?What I Learned From Being a Bridesmaid 12 TimesIs it Anti-Feminist to Let Him Pay?