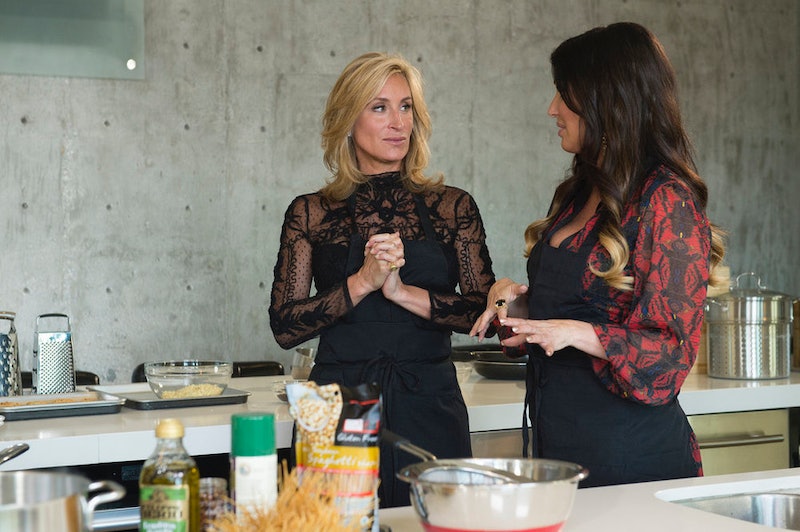 Does Patti Stanger secretly want to move back to the East Coast? Because Sonja Morgan was on The Millionaire Matchmaker , the second RHONY to appear so far this season. And the other celebrity client this week was Perez Hilton, who was emphatic about his belief that he wants to live in New York, because it helps keep him away from the tabloid culture and focus on his son. Also, Perez Hilton has a son?! Seriously?! I guess gossip-mongering is more of a stable career than it used to be. The point is, Patti seems to be inching away from the usual LA businessmen who are looking for much younger wives, and inching towards a New York based celebrity dating business… and I'm enjoying it.

Of course, Sonja managed to get two dates out of one appearance, first picking a hyper-sexual jerk she was super-attracted to, but then, at Patti's insistence, replacing him with Kent, an all-American take-charge kind of guy. In order to keep her in check, Sonja and Patti went on a double date. Thankfully, we didn't have to suffer through a sappy scene between Patti and her boyfriend (seeing Patti Stanger be flirty is like watching your parents make out — profoundly uncomfortable). Instead, Patti accompanied her matches to a cooking lesson with celebrity instructor Rocco DiSpirito, who gossiped about their compatibility like a pro.

And Perez was basically living in a romantic comedy for this episode, from his dramatic weight loss and hesitation to get back into the dating game all the way to the fact that he knew his blind date and they'd been friendly for years was right out of a script by Nancy Myers. An all-New York episode made me expect some serious drama and sass, but instead it ended with a sweet pair of dates.

Even though Patti did try going to New York for a season and the results were disastrous, maybe these episodes are a clue that she should try, try again. I know I'd be dying to see the kinder, gentler Patti take on the loud, gritty streets of NYC once more — especially if she can get some celebs to go for the ride. My new dream: Susan Sarandon on The Millionaire Matchmaker.