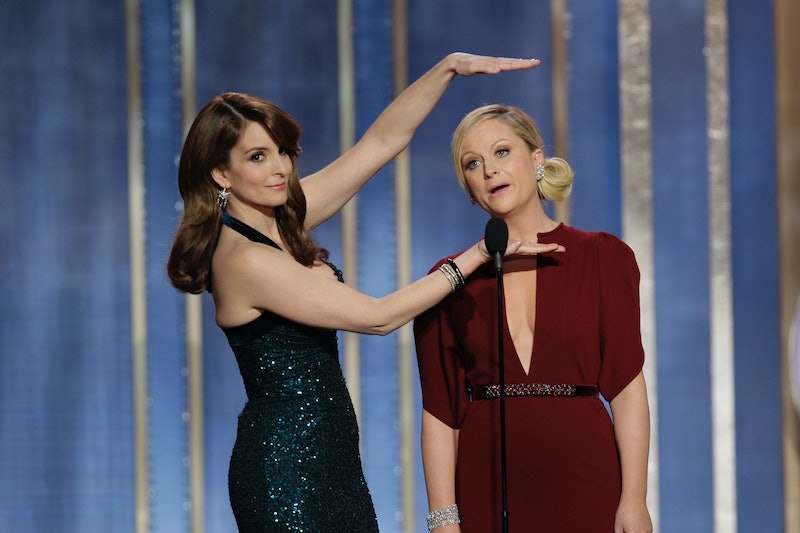 Do you enjoy non-stop laughter and a rip-roaring good time? Then chances are you're going to love the 2015 Golden Globe Awards, which will be hosted by Tina Fey and Amy Poehler for the third year in a row. Because, hey, why mess with a great thing, right? These ultra-talented funny ladies have proven time and time again that they truly are the hostesses with the mostesses (or something like that). Basically, they know how to kick some serious comedy butt while at the helm of this award show, which begs the question — does it necessarily have to stop there? Would Fey and Poehler ever consider hosting the Oscars some day? Unfortunately, based on their previous remarks, the answer is a resounding "no."

After their first Golden Globe hosting gig sparked such a major success, Entertainment Weekly made a point of asking this dynamic duo if fans could ever expect to see them emcee Hollywood's biggest night: the Academy Awards. And their responses were less than ideal. “I would never want to do it,” Fey explained. “I think that’s just a much harder, much more time-consuming job and a much more intimidating room.” Meanwhile, Poehler didn't sound too thrilled at the prospect either, claiming that bringing that same element of laughter is "tougher when you're in stadium seating," while also adding: “The Golden Globes are just loose and weird enough that they fit us.”

Now, granted, that interview was conducted over a year ago, so they may have developed a change of heart since then… though I wouldn't count on it, considering they usually mean what they say. Which is a real shame in this case since you know they'd do such a fantastic job with it. They, like NPH, have been blessed with the magic hosting touch and I, personally, could watch them host just about anything at this point. Heck, I'd even start tuning into American Idol again if they were the ones holding the reigns. (Sorry, Ryan, but Seacrest out!)

So what exactly is it about them that makes us want to see them host such a prestigious ceremony? Well, that depends… how much time do you have? For starters…

Their Improv Skills Would Be Top Notch

When it comes to an award show like the Oscars, it's important not to panic when you get stuck — something Fey and Poehler have perfected thanks to their many years of training on Saturday Night Live. They know how to deal with live television scenarios and can pull off a memorable skit without so much as breaking a sweat.

Their Jokes Would Be On Point, But Not Cruel

Ricky Gervais had the habit of always going for the jugular whenever he could, which is fine for certain scenarios. But in regards to the Academy Awards you'd want someone (or someones) who could approach relevant pop culture issues in a funny and unique way without completely cutting down a fellow celebrity to do so. This is the creme dela creme of award shows, after all, so it's important to be able to toe that line. And given what we've seen of Fey and Poehler at the Globes, they'd have absolutely no problem making that distinction.

Some of the best moments throughout their time hosting the Globes has been when they've gone out into the crowd and mingled with their friends and costars. It would be so refreshing to see these two bring that element of hilarity and interaction to the Oscars, which can sometimes be so formal that it teeters on the edge of boring. They could help to shed a whole new light on the ceremony itself — similar to what Ellen DeGeneres attempted last year with her famous selfie and pizza delivery skit. Fey and Poehler would carry on that crowd participation torch, which could prove to be exciting for both the guests and the ratings.

They Could Break the Co-Host Curse

Steve Martin and Alec Baldwin co-hosting the Oscars sounded great in theory, but not so much in execution. And we all remember how the Anne Hathaway and James Franco team-up went… even if we don't want to. These ladies could seriously help to break the co-host disaster trend since we already know how well they work on stage together, so the chemistry and comedic timing would be spot on.

And Rock a Musical Number

Don't act like this wouldn't be the greatest thing in the world. We need this in our lives.

So whaddya say, ladies? Come on, just think about it, will ya?

Well, I guess there's always the Emmys to hope for.

More like this
Anya Taylor-Joy Might Be Engaged To Her Musician Beau
By Jack Irvin and Sophie McEvoy
Hugh Jackman & Deborra-Lee Furness’ Relationship Timeline Started With A Mutual Crush
By Hugh McIntyre
The EGOT Winners List: Only These 17 Artists Have Ever Reached EGOT Status
By Radhika Menon and Marina Watts
Just 1 More Award Would Make These Celebrities EGOT Winners
By Hugh McIntyre
Get Even More From Bustle — Sign Up For The Newsletter