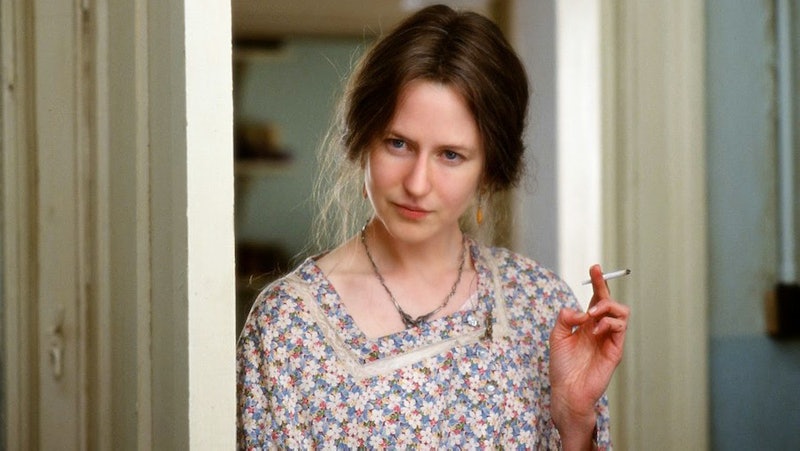 Virginia Woolf is always one of my picks when we play the, “Who would you invite to dinner?” game. (Amy Poehler and maybe Björk would also be there.) There is nothing that I wouldn’t want to talk with Virginia Woolf about, from the suffragette movement to literary criticism to what it was like to have William Thackery as a half-grandpa. I would impress her with tales of #yeseverywoman and horrify her with tales of Kim Kardashian’s fame, and she could tell me what it was like to be a founding member of the Bloomsbury Group. We would drink absinthe and laugh about love affairs that once seemed tragic, and Björk could compose a rock opera about it, set on Mars.

Yes, I have though about this once or twice.

We would all compare notes on life now versus life in 1882 when Ms Woolf was born, and life since 1941, when she filled her pockets with stones and walked into a river. I would ask her how she did it all, how she swam against the stream of propriety and expectation and convention, to become one of the greatest Modernist writers we’ve ever had, and a feminist whose words we’ve never stopped repeating. And then we’d eat the cake that Amy Poehler baked, discuss each of her most profound quotes in great detail, and make plans for our next dinner party.

With your birthday approaching on January 25, Ginnie, I want to say thanks for all the words of wisdom. Here, 10 Virginia Woolf quotes that show us why we need to keep remembering her years later.

1. “A woman must have money and a room of her own if she is to write fiction.”

Hell yes. Since Woolf published her famous essay in 1929, “A Room of One’s Own” has become a feminist battlecry. Appropriated from its intended audience of female artists, the simple demand for independence and privacy now feels like the most basic — though sometimes most difficult to achieve — right of women everywhere.

2. “So long as you write what you wish to write, that is all that matters; and whether it matters for ages or only for hours, nobody can say.”

3. “The older one grows, the more one likes indecency.”

Forget propriety and expectations. We can try to blame the Roaring ‘20s, but Woolf didn’t like to deny herself certain pleasures, whether it was a good book, a good debate, or an extramarital affair with another woman.

4. “Never pretend that the things you haven't got are not worth having.”

Virginia Woolf was not a complacent woman. She worked for the things she wanted with tireless enthusiasm, whether the pursuit was political, romantic, professional, or intellectual. Pretty cool for a woman practically bred for entitlement.

5. “To admit authorities, however heavily furred and gowned, into our libraries and let them tell us how to read, what to read, what value to place upon what we read, is to destroy the spirit of freedom which is the breath of those sanctuaries.”

Woolf was a member of the intellectual class, but she wasn’t a snob. She wrote a lot about books and reading, and was adamant that access, not judgment, was what readers deserved. It would have been fun to know what she thought of Fifty Shades of Grey.

6. “They can because they think they can.”

Virginia Woolf didn’t like limitations, and gave us robust, thinking female protagonists, from party-throwing Clarissa Dalloway to portrait-painting Lily Briscoe. But of course, the person who broke through the most barriers, rose to the most challenges, was Woolf herself.

7. “Once she knows how to read there's only one thing you can teach her to believe in and that is herself.”

Woolf believed women should possess intelligence and independence and pursued both in her life and her writing. Many of her protagonists struggle with the desire to achieve one or both of these things.

Virginia Woolf was not naïve enough to believe that just because women got the vote, that they had achieved equality. The more things change…

9. "It is fatal to be a man or woman pure and simple: one must be a woman manly, or a man womanly."

Woolf often said that she was bored by men, and a belief in gender fluidity and sexual freedom paired with her lackluster confidence in men’s authority was evident in much of her writing. Don’t let the cardigans fool you.

10. “If you do not tell the truth about yourself you cannot tell it about other people.”

In a time when silence, exile, denial, and shame were the prevailing attitudes towards sufferers of sexual abuse and mental illness, Woolf remained open and honest about her struggles. In the end, the knowledge that she could not escape her illness nor survive it any longer drove her to suicide at age 59, but she never once pretended that it wasn’t happening to her.