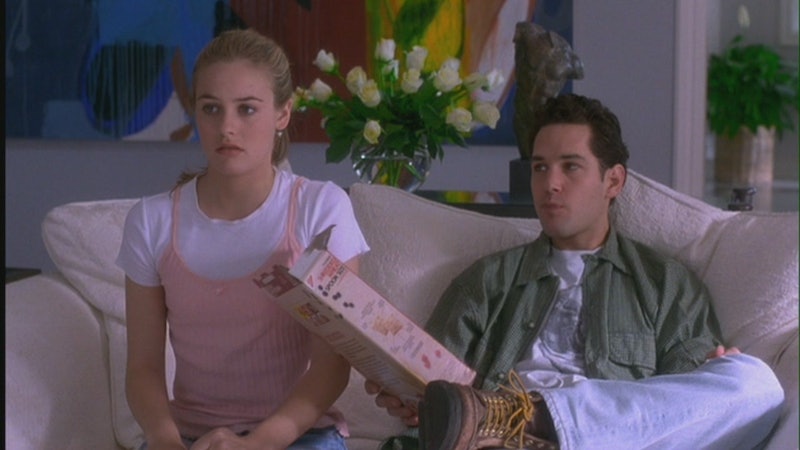 How can you tell if someone has a crush on you? Beyond that, how do couples even form these days? Obviously, frequently two people come together completely on purpose via online dating, in which case there's no doubt about the intentions of the people involved. But if you just meet someone in real life, or are already friends with them, how do you know if someone likes likes you, or just, ya know, likes you? Even though, by the time we're adults, we've been anxiously picking apart the subtle signals and trying to discern crushes for whole decades, it still kinda feels like most of us are at a loss when it comes to actually figuring out whether or not someone is interested in us in a non-platonic way.

When you meet someone online or in a bar and otherwise don't know them at all, it's easy to enter the situation with swagger. You can ask boring getting-to-know-you questions to pass time between first date margs and legit listen to answers in surprise. When you're already friends with someone, you already know all about where they grew up, their hidden talent with dart boards, their knack for baking up the world's most perfect brownies... there's a lot less ground to cover while you lay your flirt game on. Not to mention, stakes are high since the two of you already have a relationship. If you lean in for a kiss and the romantic feelings aren't reciprocated, that means not only catastrophic embarrassment — that ill-advised move could lead to the absolute, definitive dissolve of what was once a totally rad, carefree friendship.

And if you develop a crush on someone you work with, you have potentially even more room for confusion: Are they being friendly because they want to make out with you, or are they just being professionally cordial? Do they keep Gchatting you because they want to marry you and have 40 babies, or are they just, like, wondering what you want for the office Chipotle order? HOW IS ANYONE SUPPOSED TO KNOW THIS STUFF?

Breathe. One step at a time. There are ways to sort this out. If you know for sure that you're romantically interested in someone, what we need to figure out next is whether or not the other person also has a crush on you. Luckily, there are some scientific steps we can take in assessing this matter. Here are 12 incredibly reliable signs that someone is especially into you:

They remember what you say

People remember way more details about interactions with someone they have a crush on, partially because they've likely been obsessing about those details, looking for signs that you're interested. Appearing interested in a conversation is even easier now our primary form of communication is texting. Remembering tiny, inconsequential details of that conversation, however, is meaningful. Remember last week when you were complaining about your new standing desk making your heels sore? You might not. But when someone else remembers, and sends along to a link for non-fatigue rugs and offers a discount through their office account? They're into you.

They look for excuses to talk with you

They use subtle laser focus to find you across the room at a crowded party and compliment the (store-bought, totally unremarkable, non-praiseworthy) cookies you brought. It's obvious they aren't from scratch, a fact the two of you giggle over. But! They wanted an easy topic to spark conversation. And they found it in your audacious attempt to pass off Oreos as homemade. In fact, they probably find that detail adorable, because everything you do is adorable right now, because this person has a crush on you.

We all know that feeling when your throat tightens as you see your crush log on to Gchat and you ignore them, trying to play it cool, all while secretly hoping that they ping you first. If they always do, they're probably into you (and braver than you, BTW). If someone routinely shoots over the first iMessage, or waves you down at parties, it's likely because this person likes you. It's not complicated, but it's a reliable sign.

They subtweet you, in a non-contemptuous way

Social media is both an awesome and awful presence in our lives — and it complicates the hell out of dating. But if you and your crush are both active on social media, it can be quite telling of their true feelings. When you have a crush on someone, you almost can't help but be very aware of their online presence — and yours will probably give that away at some point. Let's say you go on an indulgent, "don't caaaare" Spotify spree, jamming every single Gin Blossoms song you can find (we all know this is a thing that happens), and then a few minutes later, the Object Of Your Crushfection just happens to post a YouTube link to a scene from Empire Records featuring a Gin Blossoms song. Looks like someone is trying to subconsciously tap into your line of vision and interests.

I'm aware that this sounds like you would have to be paying an insane amount of attention to each other's social media activity, and you're right. You would. Which you only do when you're in deep crush mode.

Obvious, but like, too obvious not to mention. If they are frequently foregoing the group hangs in favor of solo time with you, they're probably down to clown, ifyouknowwhatImean. (Actually, if you guys are already hanging out alone all the time, you're, uh, kind of already dating maybe. Look into that.)

They don't look at their phone

Not much says, "Hmm... I wonder what else I could be doing right now that would be better than what I'm already doing" quite like pulling out your phone during an interaction with another human. Sure, work emails and actual emergencies unfortunately happen, but considering most people's mobile device addiction, most people will disconnect when they're really interested in whomever they're with. When you're together, it's all eyes and ears on you. There's no way in Hell they would idly start scrolling Facebook unless you wondered off to grab a second round from the bar.

They play with their hair

That's Decoding Body Language Basics 101. It could be related to nerves or subconsciously showing off their shiny coif for you; a kind of peacocking. Or maybe they really wish they remembered to pocket a bobby pin this morning. Still! They probably only give a damn because of your presence.

They consider your needs in little ways

Whether you're with a group or not, they tend to suggest hanging out near your apartment or office. Did you mention in passing that your key chain was broken? Oh, look who just happened to pick one up "because it was near the checkout and they remembered that yours was broken and it's kinda cute or whatever, no big deal."

They offer to drive or pay

Your friends likely love you a whole lot (and why wouldn't they? You rule), but unless you're a frightening driver or recently got laid off, they're probably not defaulting as your chauffeur or bill-flipper. If you have a friend who suddenly seems more willing than usual to treat when you hang out, it could be a subtle (if not somewhat antiquated) approach to showing deeper interest.

They seem a little nervous or flustered

Of course there are the lucky few who have the ability to remain cool, calm, and collected when conversing with a crush, but most of human nature necessitates a serious case of anxiety when entering a close range of someone they're crushing on. Next time you're talking to the person who maybe is into, take notice of whether or not they are more clumsy than usual or lose track of what they were saying mid-sentence. It's kinda cute, and a fairly decent indicator of how nervous you are. And unless you guys happen to be tightrope walking whilst chatting, you gotta wonder where those nerves are coming from.

You bust them social media stalking you

Wait — did they just Like and then Unlike a photo you posted months ago? Yeah, they probably did. Because they were stalking you. And they accidentally clicked where they didn't mean to, and swiftly tried to cover their tracks so you wouldn't know they were looking through your archives because, duh, then you would know they were basically drunk with lust and wanted to marry you so hard. If they didn't have a crush on you, they wouldn't feel ashamed getting caught creeping. It's those flustery nerves flaring up again. Not sure why they think you won't notice.

While all the nerves we feel when we have a crush on someone remain unchanged from childhood until forever, adults have one thing going for them that kids don't: We are (sometimes, maybe) mature enough to go after what we want. Which means it's completely possible that, while you're fretting over whether or not someone is interested in you, they'll just tell you, plainly, and without mixed messages. It takes guts to put yourself out there, but as an adult person, it's something we should start making a habit of. There's a huge possibility the person with a crush on you might never explicitly say so. That's fine. But that's also an indication of cowardice — and who has time for that? Which, incidentally, means you might want to consider being straightforward with them about your feelings. You know what's really hot? Confidence. Find yourself some and don't settle for someone else who won't do the same.