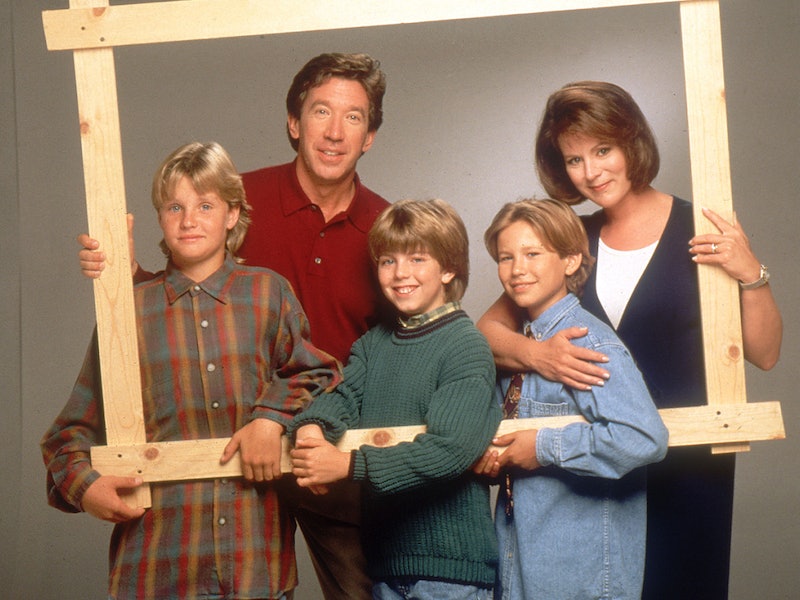 Fans of '90s sitcoms, I have the best news ever for you: A Home Improvement reunion is about to happen. Well, kind of. On Friday night's episode of Tim Allen's ABC sitcom, Last Man Standing, Jonathan Taylor Thomas and Patricia Richardson are joining the show as guest stars, and it's going to be amazing. Tim the Tool Man Taylor, Jill, and Randy back together again on the same show? As someone who grew up with this TV family, I can think of few things more wonderful than this. In fact, now that they'll be back together on Last Man Standing, I think it's definitely time for a real Home Improvement reunion to go down.

After all, it's definitely been long enough to safely feel nostalgic. The last episode aired 16 years ago, and although they did wrap things up pretty nicely — with Tool Time's ending and the family moving to Indiana for Jill's new job offer, uprooting their house in the process. But I wouldn't mind seeing where the Taylors are today, especially if it means seeing mini Als running around in flannel to match their dad's trademark outfit. Also, there's a chance my childhood crush on JTT never actually ended, and I'm not about to pass up an opportunity to see him on my TV again.

It's been hinted that a Home Improvement reunion is never going to happen, but on the off chance it does, I've prepared a few questions that definitely need answering.

Are the Taylors still in Indiana?

They were reluctant to leave Detroit but did it so Jill could have her dream job — but let's be real. Few people stay in the same job for almost two decades. And it's totally possible they'd both be retired by now. So did they end up moving back to Detroit, or are they still there?

Where are the kids?

More importantly, are there grandchildren? Because that would be amazing.

Are Al and Trudy still married?

Although since Al and Trudy were obviously meant for each other, they totally are. And I bet they have kids. And I bet they're adorable... even though, by now, they'd probably be teenagers. And, like I said earlier, flannel clad. Also, where is Heidi?!

What kind of DIY projects is Tim doing now that Pinterest is a thing?

In 2015, Tim would be practically unstoppable. I can imagine he'd have about a million Pinterest followers, and now that Tool Time is no longer, I bet he'd have a DIY site he updates regularly — or better yet, a show on the DIY channel. Imagine the high tech closet he could design now.