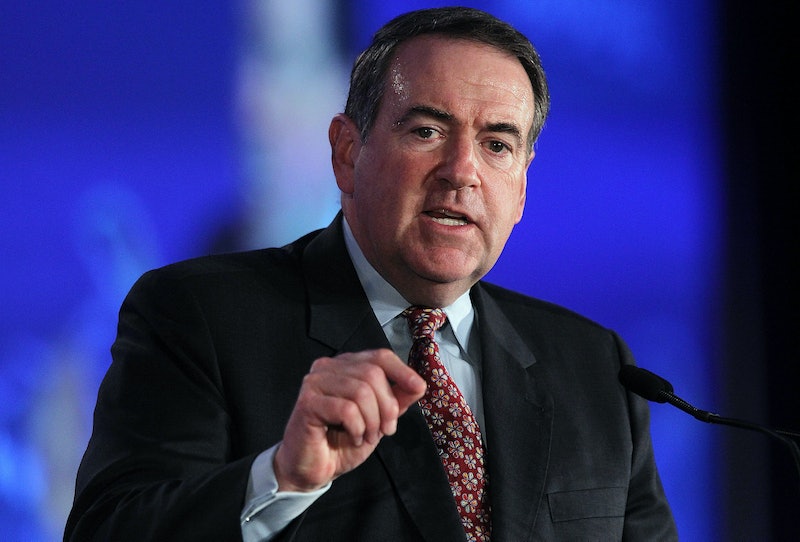 If he was looking for a fight, this former governor of Arkansas just got his wish. In his new book, God, Guns, Grits and Gravy, Mike Huckabee writes that Jay Z exploits Beyoncé as a "sex object." Huh? Who would have ever thought Huckabee would weigh-in on this celebrity marriage? Well, he has and it's causing quite the controversy. First off, Huckabee compares Jay Z and Beyoncé's 2014 "Drunk in Love" Grammy performance to "foreplay." Then, he uses some harsh words to describe the couple. But he first opens with some nice-ish comments about Beyoncé,

My reaction: Why? Beyoncé is incredibly talented — gifted, in fact. She has an exceptional set of pipes and can actually sing. She is a terrific dancer — without the explicit moves best left for the privacy of her bedroom.

Then comes the part causing a stir,

Jay Z is a very shrewd businessman, but I wonder: Does it occur to him that he is arguably crossing the line from husband to pimp by exploiting his wife as a sex object?

Now, I'm not sure if Huckabee is solely referring to the Grammy performance, or saying that Jay Z is using his wife as a sex object all the time. Let's start with the former.

If you re-watch the "Drunk in Love" performance (or watch it for the first time, like I just did, because I'm way behind the times, apparently), Beyoncé starts out on stage by herself, makes her mark, and does her thing. Jay Z enters about three minutes into the song, and the only thing I got from the performance was that this married couple is in love and doing what they enjoy in front of a massive audience. Not once did I get the impression that Beyoncé was being exploited.

As for the latter (that Jay Z uses Beyoncé as a sex object all the time), when has she ever let anyone exploit her or walk all over her? Admittedly, I'm not a huge Beyoncé fan, which means I don't know her music that well, I've never seen her on tour, nor do I obsess over her like her avid fans do. But with that said, I do know she's one tough woman, who is a great role model for women of all ages. Also, let's remember she made herself a huge success without Jay Z and long before they got married. I find it hard to believe Beyoncé would let anyone exploit her as a sex object.

Is she sexy? Yes. Does she wear revealing clothing? Yes. Are some of her songs sexual? Yes. Are her performances suggestive? At times. So what? She isn't the first artist to do any of that, plus that doesn't mean Jay Z is "pimping" her out. I have a feeling she would walk all over anyone, before she let that happen. I've never once got the impression that that's the type of relationship Beyoncé and Jay Z have. Have you?