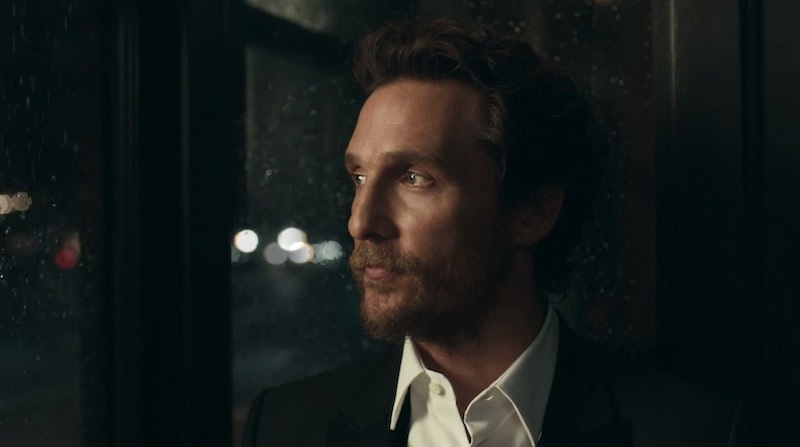 Today I learned that the parodied version of Matthew McConaughey is my favorite version of Matthew McConaughey. This video pokes fun at director Nicolas Winding Refn's recent Lincoln MKZ commercial, in which McConaughey is filmed sitting in a cafe, slowly drinking water and coffee as rain pours down outside on his fancy, fabulous car. Starkly alone, he has time to reflect on the universe, his existence, the solar system, loneliness, energy, his shirt collar, and many more pressing and elusive matters.

"Why did I order this water? Look at that. All that rain. What if this is it? What if this is the end of days?" McConaughey silently ponders as he solemnly continued to observe the rain and his car.

Voiced by John Bailey of Honest Trailers (who seriously sounds exactly like Matthew McConaughey with a hint of Moleman from The Simpsons), this commercial-parody hybrid is pretty fantastic. McConaughey's musings parallel Detective Rust Cohle's constant philosophical dialogue, meaning fans of season one's True Detective (or even any of McConaughey's recent work) will likely especially enjoy this. While it didn't really incite any real urgency to go buy a Lincoln, Refn's commercial did make me appreciate Matthew McConaughey just a little bit more. And I never realized how much I needed an existential crisis version McConaughey until today, so thank you for this one, Internet. I'm not sure how I lived so long without it.