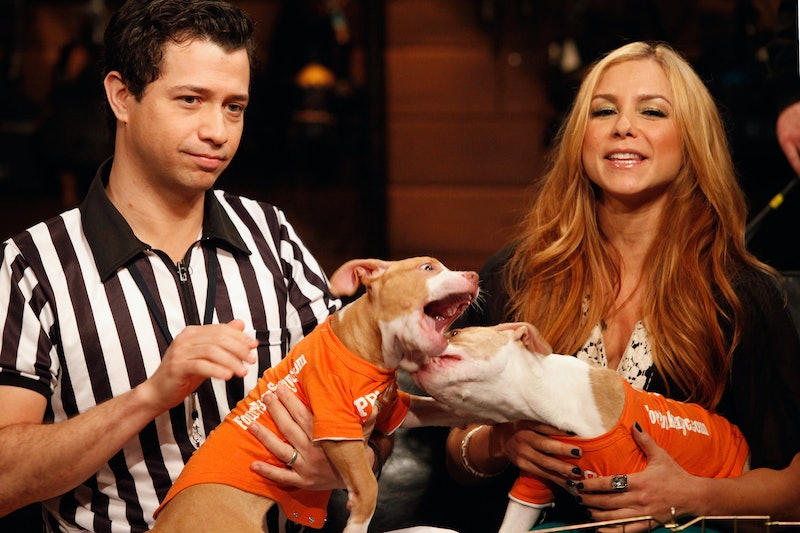 Are the NFL playoffs leaving you kinda bored? Me too. Pro football has never really been my thing. There's lots of grunting, punting, and so many penalties. It's really hard for me to get invested unless my hometown team is in the mix (Go, New York Giants!) or there's a team I can root against (Boo, New England Patriots). Otherwise, it's just a long, boring, whistle-filled game that fills the time between all the million-dollar commercials. Luckily, there's a very cute and adorable alternative: Animal Planet's Puppy Bowl, airing on Sunday night around the same time as the Super Bowl. But don't let the name fool you — the 2015 Puppy Bowl has all kinds of cute animals.

The Puppy Bowl includes cute puppies (duh), the BISSELL Kitten halftime show, a sassy tweeting bird sideline reporter, hamsters in the Twizzler blimp, and goat cheerleaders. Could it get any cuter? Probably not, but last year, the special featured penguin cheerleaders and Keyboard Cat. This year's halftime headliner will be "Katty Furry" (their version of Super Bowl Halftime performer Katy Perry) and the hamsters will be performing from a biplane. And don't forget, all of the puppies and kittens featured in Puppy Bowl XI come from shelters and rescue groups in the United States and Puerto Rico.

Here's a closer look at some of the adorableness that'll be in store for us on Super Bowl Sunday:

There's always more to say about these fluffy and furry cute little balls of love. This year, the pups will be divided into two teams: Team Ruff and Team Fluff. There will be some kind of scoring system put into play (but does it really matter?) for the 55 puppies on the field.

Like last year, you can also preview the cute canines who will be in "competition" as well as build a fantasy team — as if hanging out with all of these puppies isn't the stuff dreams are made of. All of them are my MVPs — most valuable puppies.

The famed meme kitty Keyboard Cat paid a visit to the BISSELL Kitty Halftime Show last year, playing a crowd-pleasing cover of Bruno Mars' "Locked Out of Heaven" (in the video above). The cats responded by just kinda wandering around and playing with toys on strings.

No word if Grumpy Cat, Nyan Cat, or any other meme kitty will make an appearance alongside Katty Furry this year.

So, goat cheerleaders. Yeah, that wasn't what I was expecting either. Last year's penguin cheerleaders made some kind of sense (or none at all), but goats? Well, these goats will be giggling, so I guess that's along the right track.

And if the above video is to be believed, goats just might be more energetic than puppies. How is that even possible? Look at that goat hop and dance around. Maybe I'm wrong and goats are the right animal to cheer those puppies on.