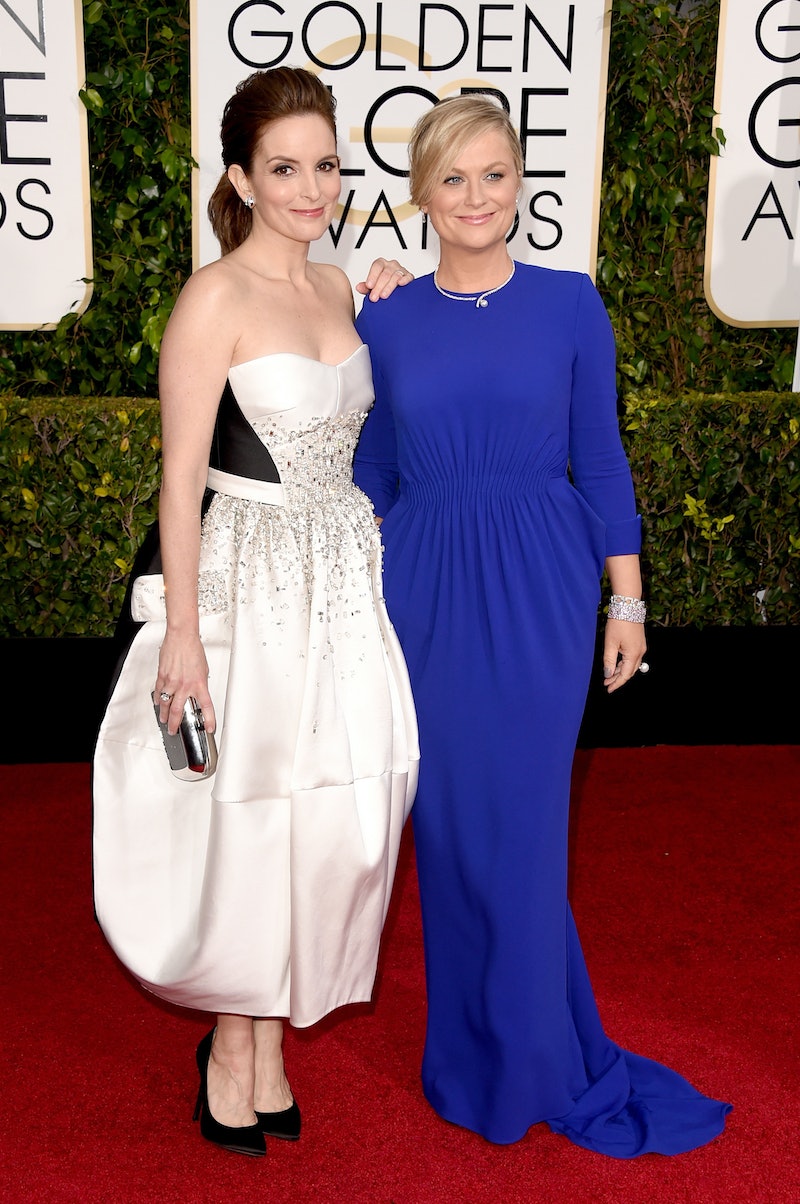 For the third consecutive year, the comediennes are back hosting the Globes. When we talk about women in comedy today, it's almost impossible not to mention SNL legends/blockbuster actresses/memoirists/all-around funny-girl geniuses Tina Fey and Amy Poehler. Whether making us swirl into a series of existential quandaries via their autobiographical books Bossypants and Yes Please, or captivating us in every single Mean Girls re-watch (the likes of which have tripled thanks to Netflix), these are women who awe and inspire us every day — and make us feel like we're going to pee our pants on a minute-by-minute basis whenever they're on our TV screens. TMI? Nah. It's because of them that I am a religious Golden Globes viewer. Not only because they make the award show infinitely funnier, but because they also reify their not-as-discussed, no-less impressive sense of style every year.

I've been waiting to see what Fey and Poehler would wear to 2015's Golden Globes for weeks now. Would the outfits compare to their first red carpet appearance as G.G. hostesses — during which Fey wore a custom L'Wren Scott dress and Poehler went for a Stella McCartney tux? Could their ensembles tonight possibly ever top 2014's red carpet: floral Carolina Herrera for Tina and a classic Stella McCartney gown for Amy? I was pretty certain Poehler would opt for Stella once more — probably something in solid black. And I was half right as she dazzled in royal blue Stella tonight. As for Poehler, I thought she would go for a more magically outlandish print or pattern. (And secretly I hoped they would both wear those cheese-covered rompers and stilts.) But her custom Antonio Berardi gown isn't anything I could have ever mustered up in my brain.

Poehler looks as chic and sophisticated as I knew she would, but unlike her previous Golden Globes wardrobe choices, this year's has a bit more pizazz to it thanks to that incredible on-trend hue. As for Fey — what can I even say? There's quirk (because how could there not be) but also excruciatingly perfect beauty. She looks like a fairy princess, and I'm in love. These women know how to hybridize grace, elegance and fun. Now... Let's get this party started. It's time for the show.

P.S. In case you missed their previous fashion wins at the Globes, check out 2013 and 2014's successes: