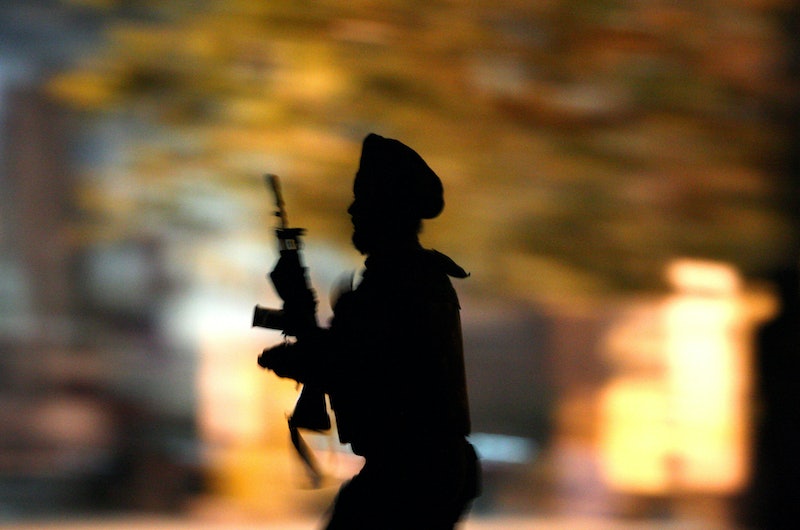 Despite a decade-long War On Terrorism, George W. Bush's "Axis of Evil" seems far from vanquished — instead, it's simply changed membership. Following a devastating year of terrorist attacks across the world, including the recent attacks on Charlie Hebdo in Paris and the Boko Haram attacks in Nigeria, President Obama has scheduled a "global security summit" for world leaders to discuss potential solutions and tactics to fight extremism. The summit was initially scheduled for October of 2014, but was quietly postponed sans explanation before it took place. Now, a new plan has been set in motion for various national executives to meet on February 18.

According to a statement by White House Press Secretary Josh Earnest, the gathering of lawmakers and politicians will assemble with the chief purpose of "highlight[ing] domestic and international efforts to prevent violent extremists and their supporters from radicalizing, recruiting, or inspiring individuals or groups in the United States and abroad to commit acts of violence." The summit on "Countering Violent Extremism" will focus on actions taken by the Islamic State, though with Al Qaeda claiming responsibility for the Parisian attacks, leaders will certainly have numerous threats to discuss. The White House specifically mentioned terrorist acts in Ottawa, where the Canadian Parliament was attacked, in Sydney, where a hostage situation gripped the Australian city for 16 hours, and in Paris.

Given that each of these attacks were carried out by citizens of the respective countries in which the violence occurred, it now seems undeniable that the international community is plagued by the issue of "homegrown extremism," that is to say, terrorism that is enacted by members of their own community.

The Islamic State has been frighteningly effective in their recruitment strategies, and as of October of 2014, a United Nations report suggested that ISIS' numbers had reached an "unprecedented scale" with some 15,000 foreign jihadists from over 80 countries joining ranks with the terrorist organization. Worse yet, some of the countries among the 80 were those that had previously seen no ties with terrorism of any sort. This 15,000 figure marked a 3,000-person increase from September 2014, pointing to a rapid trend of growth that bodes ill for the international community.

According to the UN report, initially obtained by The Guardian, "Numbers since 2010 are now many times the size of the cumulative numbers of foreign terrorist fighters between 1990 and 2010 -- and are growing." And a solid proportion of these foreign terrorist fighters come from Western nations, like the United States. In September, Mubin Shaikh, who once operated as a Taliban recruiter from his birthplace of Toronto, Canada, told the International Business Times,

Experts have also noted that many of the Westerners involved are teenagers with little previous exposure to Islam. The IBTimes suggests that "dozens" of Americans have gone abroad with the intention of fighting alongside ISIS.

According to CNN, much of ISIS' ability to attract younger individuals, like teens, comes from their capacity to tap into that natural, adolescent sense of rebellion. As Richard Barrett of The Soufan Group noted, many teens are in search of an identity or sense of belonging, which ISIS claims to provide. Barrett writes, "The general picture provided by foreign fighters of their lives in Syria suggests camaraderie, good morale and purposeful activity, all mixed in with a sense of understated heroism, designed to attract their friends as well as to boost their own self-esteem."

Furthermore, ISIS' command of social media is often used to appeal to a sense of duty — CNN terrorism analyst Paul Cruickshank noted that one of the most frequent messages broadcast by ISIS recruiters is, "You have to join. It's your religious duty." And in the same vein is ISIS' command of videography, and considering that the star of many of their violent films are Westerners, like the man with the British accent who was seen in the beheadings of Americans James Foley and Steven Sotloff and Britons David Haines and Alan Henning, there is a strange sense of inclusion perpetuated by the group. Indeed, it sends the message, "Westerners can join, too!"

Equally persuasive is the cult-like atmosphere of Islamic State, as well as its "success" in recruitment and their clear influence over the international terrorist landscape. Steve Hassan, the founder of Freedom of Mind, a group that seeks to expose destructive cults and cult behavior, told CNN of ISIS, "This is a political cult using religion and a perversion of Islam as the shield. But in fact it's a systematic effort to create an army of basically tranced-out followers." And then there are the 2,000 Westerners who have taken up arms with ISIS, and their reputation only aids in increasing their following. As Barrett wrote,

[ISIS] tend to be more inclusive, better organized and better financed than their more moderate counterparts. They also tend to be more assertive and have more of an impact on the battlefield, and so enjoy greater local standing, which makes them still more attractive to foreign fighters looking to make their own impact.

The Need for Community

With some 500 British and 700 French citizens suspected of traveling to Iraq and Syria to fight and train with the Islamic State and other similar groups, President Obama's summit could not be more necessary. The White House stressed the importance of community building within the United States to prevent the spread of domestic terrorism, noting that "education administrators, mental health professionals, and religious leaders, with law enforcement agencies" would need to cooperate in order to "address violent extremism as part of the broader mandate of community safety and crime prevention." Earnest continued,

At the same time, our partners around the world are actively implementing programs to prevent violent extremism and foreign terrorist fighter recruitment. The summit will include representatives from a number of partner nations, focusing on the themes of community engagement, religious leader engagement, and the role of the private sector and tech community.

The summit is meant to build on strategies initially put forth in 2011, and hopefully weave a pattern for international resistance to terrorism. Alongside partner nations like the United Kingdom, Obama and other world leaders aim to draft a series of guidelines that all countries will use in addressing and fighting the terrorists both at home and abroad. The White House summarized, "Through presentations, panel discussions and small group interactions, participants will build on local, state and federal government; community; and international efforts to better understand, identify and prevent the cycle of radicalization to violence at home in the United States and abroad."