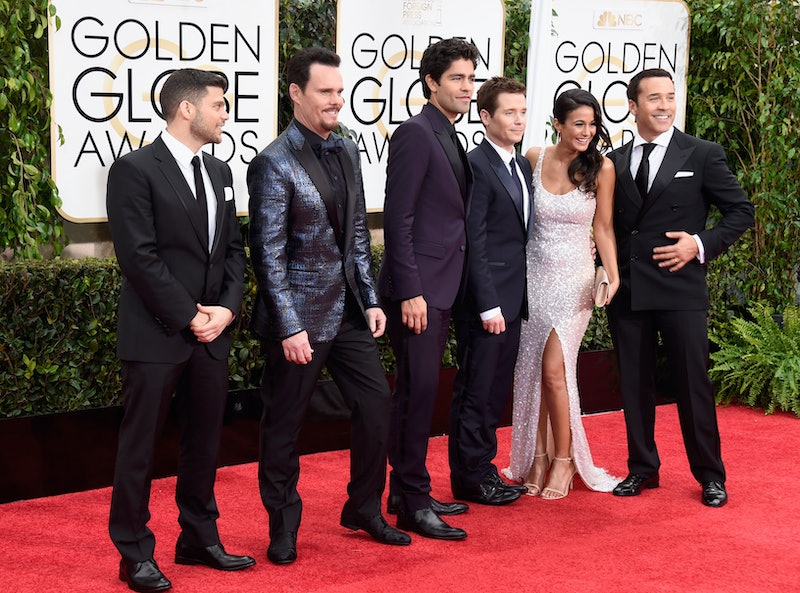 You may have expected a lot of things from the Golden Globes red carpet this year. Trips (here's looking at you JLaw), maybe a mani cam blunder, and obviously some seriously amazing dresses, but what you probably didn't expect was the Entourage cast to make their way down the crimson velvet. Now, I know you're probably wondering what the hell the Entourage cast is doing at the Golden Globes, because their show went off the air back in 2011. And, I could be wrong but I think there's some sort of rule in place that you can't be nominated for your work four years after the fact. But here's the thing-- this isn't about the television show at all. This appearance is all about the cinema, baby. The cast is on the red carpet to film for the upcoming movie.

Yes, you're right. This is an inspired, wonderful idea from the Entourage powers that be. One, because the movie seems that much more authentic, and two, because as fans we sort of feel like we're part of the experience. Actually, we are a part of the experience, because all over Twitter there are pictures and comments and questions and it's a fantastic source of publicity and chatter. So, let's take our turn putting our two cents in. Based on the snap shots of their red carpet appearance, let's guess some movie plot points.

Drama Fails To Steal Vince's Spotlight, Because He's Called "Drama" for a Reason

But that metallic tux almost does. Almost.

E is Pensive As He Tries to Do Damage Control, Because Let's Be Honest, Vince is Probably High

It's hard to be the responsible one, E. We know.

That may or may not turn physical.

As it turns out, E is not so good at diaper duty.