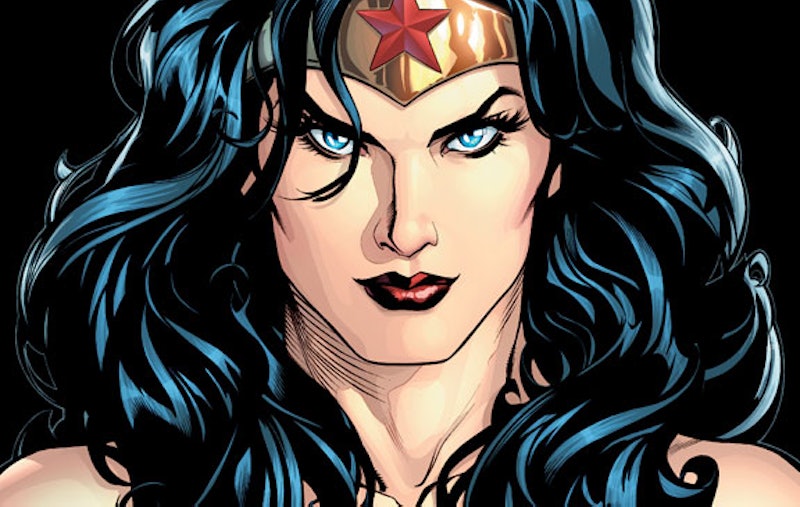 For one of the most beloved — and most heavily discussed — superheroes of all time, Wonder Woman sure has had a dearth of actual live-action appearances in the past... well, in the time since Lynda Carter hung up her Golden Lasso in 1979. But there is the exact opposite of dearth when it comes to talking about Diana Prince and what is and/or isn't keeping studios from having the confidence to bring her back — and not just for a hastily aborted TV show. Recently, it's been rumored that Man of Steel sequel Batman vs. Superman will feature Wonder Woman, and Uproxx paired that news with this very notable recent quote from Carter herself:

Maybe they need a female writer who gets it. I’ve often tried not to say that, but I think it’s the truth. It’s like, ‘Hellooooo guys, get a female that understands what that’s all about.’ You look at any society that suppresses women, and it’s violent. Look around the world. … There’s a humanity that they’re missing. There’s got to be a sweetness, a kindness, a goodness in the character. The rest takes care of itself.

It's kind of a notorious problem in Hollywood that no one can seem to "get Wonder Woman right." Joss Whedon even tried and failed, and he's a man with a pretty impressive track record when it comes to writing complex female characters.

But maybe that's just it: From David E. Kelley's botched Wonder Woman pilot to Joss Whedon's abandoned Wonder Woman feature script, why aren't there more women taking a crack at what is arguably the most famous female superhero of all time? Why not leave one of the most iconic feminist figures in history to be written by, I don't know, a female?

Here's another thing Carter said in her interview with ETOnline:

They miss the point of Wonder Woman. [...] I think they try to just make her a female version of a male superhero, and that’s not what she is.

Is part of the character's problem that she's being bandied around like "a female version of a male superhero?" She's definitely right in that female superheroes shouldn't have to be masculinized in order to fit our idea of heroic.

There are female superheroes for whom adopting aspects of traditionally masculine-associated traits fit more smoothly with the character — Black Widow in The Avengers, for example, mixed a certain emotionally reserved "macho" toughness with a heightened savvy of how to use and manipulate the people around her with the more traditionally feminine of her assets.

The argument definitely exists that people might not want a more "sweet" (read: a more traditionally feminine, and therefore associated with weakness) female superhero right now, which seems to be what Carter is pushing for. It might be, though, that when it comes to this particular character, that trait might be one (of many) that lie at the core of the humanity that might be the key to Wonder Woman.

This all reminds me of a quote that regularly circles around Tumblr, originally posted by user Madlori in response to a question about writing ladies:

Basically: We all contain multitudes, and that shouldn't be erased because we're looking for someone kick-ass.

Writing an icon is hard. She's more than a lone person, she is a history. She's one who symbolizes the embattled strength and impenetrable perseverance of second-wave feminism. But to bring her to life in the world we live in now, maybe the key to Diana Prince lies in not catching ourselves being paralyzed by that past, but in thinking of her as a person, and in bringing Wonder Woman along with us into the third wave — with everything that comes with it. Image: DC Comics

More like this
Self Esteem's “F*cking Wizardry” Is An Anthem About Knowing Your Worth
By El Hunt
'The Distant Echo’s Ending Mirrors 'Karen Pirie' In One Crucial Way
By Catharina Cheung
This Episode 6 Moment Foreshadows Viserys' Fate On 'House Of The Dragon'
By Grace Wehniainen
Nicola Coughlan Shared A Lady Whistledown Excerpt From ‘Bridgerton’ Season 3
By Grace Wehniainen, Alyssa Lapid and Sam Ramsden
Get Even More From Bustle — Sign Up For The Newsletter